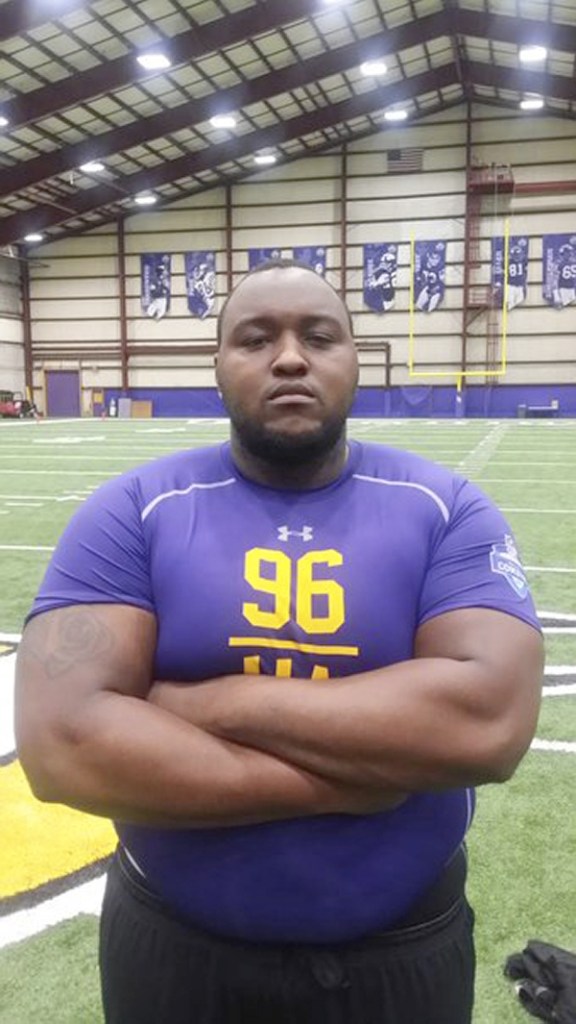 KANNAPOLIS — Even if he didn’t weigh a sturdy 335 pounds and have NFL aspirations, Sheldon Saddler would be an interesting guy.
He’s a fellow who alternates Bible verses with pancake blocks.
On Saturday afternoon, Saddler, a powerful offensive lineman who has completed a stellar career at Shaw University, participated in the NFL Regional Combine in Minnesota.
Regional combines are showcases for athletes who didn’t get invited to the marquee combine in Indianapolis. Regional combines also were held in Houston, Arizona and Baltimore, and the final one of the five is scheduled for this weekend in New Orleans.
The Vikings hosted Saturday’s combine at their indoor facility in Winter Park, and prospects went through the standard battery of tests and drills that measure speed, agility, strength and endurance in front of pro scouts.
“It was a great experience,” Saddler said. “It was an opportunity for a lot of people to see me, and while my test numbers weren’t the best I’ve ever done, I did have standout moments in the drills.”
On Saturday night, Saddler visited the 520-store Mall of America, the nation’s largest mall.
On Sunday morning, Saddler attended church. He found a place to worship in Minnesota even though he was 1,100 miles from home, and there weren’t any NFL scouts watching.
That says as much about him as his respectable 27-inch vertical jump, his broad jump of 8 feet, 5 inches, and his hand-timed 5.08 seconds in the 40.
On Monday, Saddler flew back to Raleigh, and then he drove home to see his family in Kannapolis.
While he was born in Florida, Kannapolis is where Saddler grew up, and he made his mark at A.L. Brown High. As a sophomore, he played on the 2008 team that finished as 3A state runner-up.
As a senior, he made the All-State team and he played in the 2010 Shrine Bowl of the Carolinas.
In practice that week, he blocked Anson’s Stephone Anthony, now a New Orleans Saints linebacker. In the game, he frequently had to try to block Jadeveon Clowney, a 6-foot-5 monster from Rock Hill who would become the first pick in the 2014 NFL draft.
“There was a lot of talent on the field that day, we had guys like Eric Ebron (UNC) and Kris Frost (Auburn), and it’s a day I’ll never forget,” Saddler said. “Clowney was a talented guy, with a lot of height, but I know I never backed down.”
Saddler weighed 265 as a high school senior and was bench-pressing more than 400 pounds. He impressed a lot of colleges. Unfortunately, he’d gotten a late start as far as applying himself in the classroom, so he had to go to a junior college for two years.
“He’d gotten behind the 8-ball academically, but his junior and senior years he was a pretty good student,” A.L. Brown offensive line coach Todd Hagler said. “He improved his grades a lot, but those early years hurt him.”
His best option turned out to be Long Beach City College in California. That’s where the church became a bigger part of his life.
“California was a long way from home, but it worked out well,” Saddler said. “Going out there I had to prove myself all over again just like I did in high school. I learned how to hustle and grind and I learned to play with a chip on my shoulder on every play.”
After two years at Long Beach, Saddler was academically qualified and weighed 292 pounds and he had a stack of college offers to sort through — more than 20. He picked Shaw, a Division II CIAA school in Raleigh. Shaw was his choice because it was close to home, it offered a business major, and it had opportunties for campus ministry.
Saddler was a standout for Shaw. As a senior left tackle, he earned CIAA Offensive Lineman of the Week honors when the Bears put up 506 yards in a 32-25, double-OT win against Winston-Salem State. He started every game in his career and he missed one offensive snap in two seasons.
“I had to come out one play my junior year because my helmet flew off,” Saddler said. “Other than that, every snap. I played against good people. I played against North Carolina A&T. In our league, Winston-Salem State, Fayetteville State and Johnson C. Smith all had good defensive linemen.”
Hagler, a strength and conditioning guru, remembers how Hagler wore people out in high school.
“He just dominated opponents for us,” Hagler said. “I remember a guy speed-rushing him when he was pass-blocking, and he just punched the guy and pancaked him. You could always look at the kid who had to play against him, and by the fourth quarter, that kid would be ready for the game to be over.”
Saddler’s best moments at the Minnesota Combine came in pass-blocking drills.
“Getting back a few steps from the line of scrimmage very quickly on pass protection is something I do well,” Saddler said. “I’ve got good kick-step technique, and I think I surprised people with how quick I was. I got a lot of positive feedback from coaches after those drills.”
Saddler, who is listed at 6-foot-2, will have an additional chance to impress NFL scouts when he goes to Greensboro for a Pro Day on April 4. Former Livingstone and Shaw coach Robert Massey, who is now with Winston-Salem State, got Saddler on the list for that workout.
Only two dozen of the hundreds of athletes who attended regional combines in 2015 made it onto NFL rosters, but Saddler greets each day with a Bible verse and the unwavering belief that he’ll be one of those small-school success stories.
“The NFL is my hope,” Saddler said.