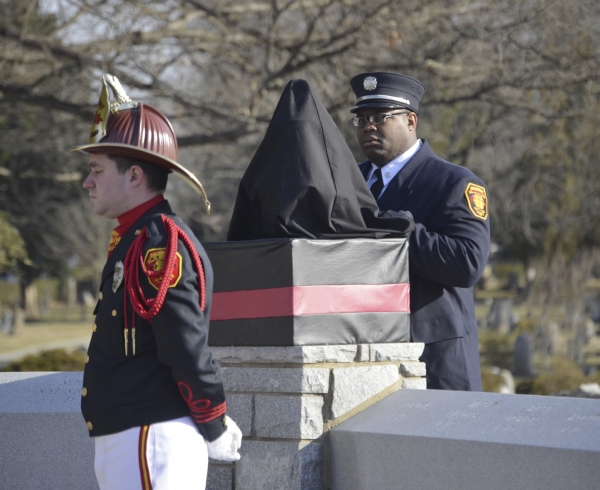 Members of the fire department honor guard during a Monday ceremony to honor the lives of Victor Isler and Justin Monroe, who died in a fire eight years ago at Salisbury Millwork. Shavonne Walker/Salisbury Post

It seems like yesterday when firefighters received a mayday call from within the walls of the Salisbury Millwork building. It was hours after an employee called 911 about a fire at the woodworking business that firefighters Victor Isler and Justin Monroe would become trapped inside.

Eight years ago the two men, Isler, 40, and Monroe, 19, died as a result of heat exposure and carbon monoxide poisoning. Fire investigators later revealed parts of the building collapsed around the men.

More than 100 firefighters responded to that five-alarm fire as it quickly spread from an office to a warehouse at the building located on South Martin Luther King Jr. Avenue.

On Monday a cadre of area firefighters lined the perimeter to honor the two firefighters, whose deaths continue to be counted as one of the most tragic events in local firefighting history.

Each year the firefighting community, area residents, family and friends return to the Salisbury-Rowan Firefighters Memorial site, in the 1400 block of South Main Street, to honor the two men.

“It started out as a normal day with a big fire. Things were going well, but as you know, things changed in an instant,” Fire Chief Bob Parnell said during the service.

Capt. Rick Barkley, who was also inside the building, was seriously injured that day and rescued by a rapid intervention team. Locke firefighters Bradley McKnight, James Hall and Chief Rusty Alexander, members of that rescue team, were among those also injured while responding.

Over the years, Victor’s wife, Tracy, and their two children would attend, as did Lisa and Eddie Monroe, Justin’s mother and father. Eddie died in a 2012 car accident. In recent years, attending the ceremony has become at times unbearable. The Monroe family did not attend this year.

“It’s an honor that my uncle’s memory is still being honored,” Blalock said.

She said it was very special for her family that the Rowan County community would continue to keep his memory alive in this way.

Isler is buried in his home state of New York, and on his birthday and at other times during the year, the family gathers at his grave site, Blalock said.

“We try to honor him as much as we can,” she said.

Many firefighters who worked alongside Monroe and Isler attended the ceremony, but so did firefighters like Brandon Jones and Andrew Pinkston, both of whom had never met the fallen firefighters.

Jones, who is in the midst of a fire internship, said even though he’d never met Monroe and Isler they were “still family.” He is a third generation firefighter and understands being a part of a “brotherhood.”

“It’s an honor to serve in a department that honors them,” Jones said.

Pinkston said it was an honor to represent the Salisbury Fire Department.

“It’s important for our community to continue to honor and memorialize these two firemen who gave their lives,” said Mayor Karen Alexander, who stood in for the Monroe family.

She said the ceremony is also important for those firefighters who still serve. Alexander said she’s always honored to attend the ceremony.

A year after the fire, the National Institute for Occupational Safety and Health, an arm of the Centers for Disease Control, released a report that provided some recommendations including improvements to modes of communications and limiting risk.

Those recommendations led the city to purchase newer, more rugged radios for fire personnel. The fire investigators also recommended a policy that would limit interior offensive operations in well-involved structures that don’t have sprinkler systems and those that don’t have someone inside.