The Dart: Winging it through life 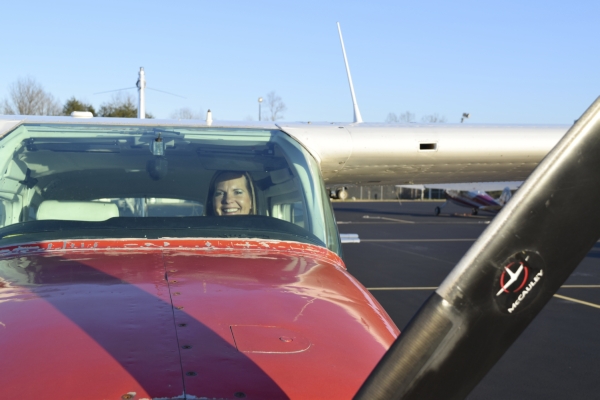 Sandra Csanyi got her pilot license two years ago. She's currently training for her instruments exam. She and husband, Les, met through Les's flying buddy and Sandra's brother, Mike. Sandra says the two encouraged her to fly. Rebecca Rider/Salisbury Post

SALISBURY — It’s a sunny Sunday afternoon when the dart lands on the back door of the Rowan County Airport. On that blue day, the weather is wobbling between two seasons and a few small planes circle over the runway before veering away, shrinking into the distance. Les and Sandra Csanyi were out here earlier, taking advantage of the bright blue skies, warm weather and light wind to give a group of kids rides in their red and white Cessna.

Sandra says it’s something that Les loves doing, seeing someone’s expression as they get their first taste of flight, snapping the tether between them and the ground. It’s something that sticks with him as a pilot, and the kids as a passenger — some of them have gone on to get their own pilot’s license.

Les hails from Toronto, and was an avid hockey player until he moved down to N.C.

“And when he moved here, there was no hockey,” Sandra said.

He chose flying. But it wasn’t because he loved aviation — the opposite, in fact.

“I was scared of heights, and I figured flying would cure that,” he admitted.

While it hasn’t cured his fear, it’s provided an escape from it. For Les, being in a cockpit feels stable and secure, like being on the ground. It’s safer than driving, he said. And it represents freedom and adventure, a way to get away from life.

“Nobody can call me,” he said.

In a way, Les and Sandra met through flying. Les got his pilot’s license in 1999 and met Sandra’s brother, Mike Strickland, at the Rowan County Airport. The two became flying buddies, and pulled Sandra along with them. Two years ago, she and Les got married, and she got her pilot’s license.

“I don’t think I would have done it on my own,” she said.

Mike said there’s a shortage of women in aviation, but Sandra has grown a love for flying, just like her brother and Les.

“It’s peaceful,” she said, “and you see things you don’t see on the ground.”

It’s fed a wanderlust in the Csanyis, and they travel whenever they can. Les flies for business, and when the weather’s nice they take their small six-seater to visit Les’s family in Canada, or go to Florida. Sometimes, Sandra says, she or Les will close their eyes, put their finger on a map, and go. They’ve been to Cancun, New York, St. Louis, New Orleans and Chicago, and are talking about trips out West — or even to Europe.

And the wings of their old plane have carried them some strange places. It carried them to Haiti after the 2010 earthquake, delivering medicine and needed supplies.

That year, Les said he received a call from Duke, asking if they’d fly a shipment of food and medicine down to strategic locations. The two picked up donations in Johnston County, and bought a few of their own, before taking off and making the long flight to Haiti — a trip of more than 800 nautical miles.

Les said he volunteered to fly relief missions out of a sense of adventure, but they were both nervous as the tall mountains of Haiti came into view and they flew over the water towards their final destination, an airstrip base in Jacmel.

“It’s the unknown,” Les said, “You don’t know what you’re going into.”

They didn’t know what they’d find. The Canadian Army ran the small airport and landing strip at Jacmel, and Sandra said she remembers the guns that guards carried and the high fence surrounding the airport to keep people out.

“People were desperate for food,” she said.

They left the supplies in the care of the Canadian army and a doctor who was present at the airport, and began the long flight back. Sandra said she was glad she had the opportunity to help in such a way.

“A lot of people don’t have the opportunity to go that far to help,” she said.

It’s a feeling that would carry them to Georgetown after the floods of Hurricane Joaquin swept over South Carolina. Les is also signed up with Angel Flight, to help people who can’t afford transportation get needed medical treatment far away — he hasn’t made a trip yet, he said, but hopes to once he retires. And Sandra is training for her instruments test, where she’ll fly blind, guided only by the dials and readings on the main panel.

In the meantime, they fly whenever skies are clear. Les takes kids and families on short hops around the airport. Sometimes they’ll take Mike and fly up to air shows, camping out under the wing of the plane.

For Les and Sandra Csanyi, flying has given them the opportunity to live life without limits.

“You can go anywhere,” Les said.