Trump campaigns for president in Concord 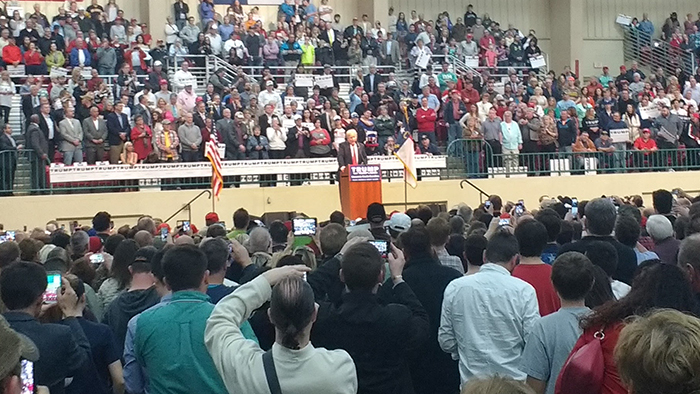 Monday’s event is the closest 2016’s presidential politics have come to Rowan. As Trump spoke to a nearly full arena, he focused on trade deficits with other countries. He briefly discussed repealing the Affordable Care Act, giving control of education to states instead of the federal government, a strong military and second amendment rights. Retired NASCAR driver Mark Martin also appeared briefly on stage and endorsed Trump.

Equal time was devoted to joking at protesters. Several groups of people, in various spots in the arena, were escorted out of Trump’s speech.

“I didn’t think you had people like that in North Carolina,” Trump said as one group was escorted out.

Trump began his speech by speaking about Carrier, a company that makes air conditioning units. The company has announced plans to move at least 1,400 jobs from Indiana to Mexico. Trump proposed a tariff on the company if it wants to sell its products in America

“What I would do with Carrier is say the following: ‘Folks, enjoy your stay in Mexico, build yourself a really nice plant,'” Trump said about the company. “Every single unit that comes across the border, you’re going to pay a 35 percent tax on that unit.”

He tossed the companies Ford and Nabisco into discussion about taxes on imported products. Both companies have announced plans to make more products in Mexico.

In his free-flowing speech, Trump only briefly discussed other topics. Trump said he would repeal and replace “Obamacare.” The health care law has led many companies to move employees from full- to part-time work, he said.

He mentioned giving control of education to states, instead of the federal government. Trump said he would repeal Common Core.

When discussing the military, Trump briefly pondered whether America’s army would be stronger with the late General George Patton leading forces in the Middle East. He  said American armed forced are handicapped by being forced to obey laws. Meanwhile, terrorists don’t have to obey laws he said. Trump said he supports waterboarding and worse, if possible.

He frequently paused throughout the speech as protesters were escorted out. The protesters were often heckled as the crowd pointed and booed. One protester was pushed and hit with Trump signs as law enforcement pushed the man out of the arena.

In another instance, Trump taunted a young protester by telling the man to “go home to mommy.”

A full story will appear in Tuesday’s Salisbury Post.