To build a home: the long road to the central office 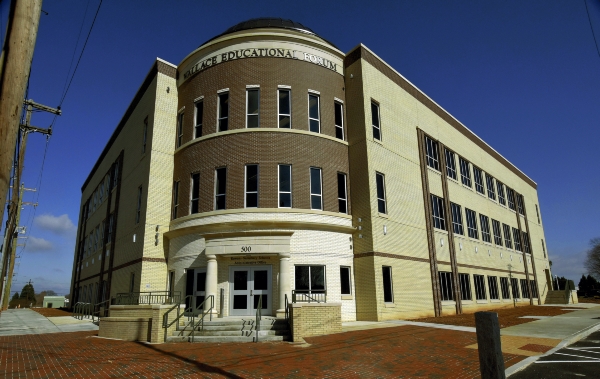 SALISBURY — Friday morning at the Wallace Educational Forum had a festive spirit — some staff wore glittering party hats and cheerful beaded necklaces as they came in the building. Others dressed down, wearing comfy jeans, sweatshirts and sneakers for the big day.

Boardmember Dr. Richard Miller said he saw school system employees smiling widely, and exclaiming over offices with windows that let in plenty of light and floors that were solid and didn’t creak or give under weight.

“We should declare today a system holiday,” Board of Education Chair Josh Wagner joked.

After nearly 30 years of waiting, the Rowan-Salisbury School System has finally found its home.

The district has needed a central office since the city and county systems merged in 1989, former board of education member L.A. Overcash said. After the merger, the system operated out of five separate and rapidly aging offices scattered around Salisbury and East Spencer for the next 27 years. Friday morning, that finally changed.

The idea of a centralized school office has been tossed around since the merger, former board member Kay Wright Norman said, but it always got put off. When she first joined the board in 1994, the merger was still new and uncertain, and a central office was considered a politically delicate subject. Later, the board put building new schools for a growing student population before the system’s administrative needs.

“And then it just didn’t get anywhere. Everyone has just kicked that ball down the road,” Norman said.

In the meantime, school system employees drove between the five offices, burning up man-hours and racking up gas and travel expenses while the deteriorating buildings put a drain on operating costs. She called conditions at the school’s former office on South Long Street “depressing,” and Wright Norman said the building was “dilapidated.”

“If you don’t care more about your system than that, you probably don’t care any more about the people who work in it,” she said.

There’s been a lot of pushback, school officials said, from the community and the county. People who didn’t think the building was necessary, or who thought that the nearly $9 million construction was a waste of funds or who say the new Wallace Educational Forum is too lavish.

“There are people who have called it a ‘Taj Mahal,’” Wright Norman said. “Well, I don’t know what their vision of a Taj Mahal is, but it isn’t mine.”

Individual offices are small, practical and functional, she said – but she hopes the clean, bright atmosphere goes a long way towards improving employee happiness. Moody said that people work better when they are happy with their surroundings, and that will ultimately have a positive impact on students. It’s a point Miller chose to illustrate with an analogy: the district is like a wheel with 35 spokes, Miller said.

“The central office is the center core that holds . . . them together.”

When employees feel happy and valued, Miller said, that will ripple out to the schools. And ultimately, Miller and Moody said, the cost of building a new office will be less than the cost of maintaining five separate ones.

But getting the office took a lot of “tenacity.” For nearly 20 years, a centralized office was little more than wishful thinking, Wright Norman said, but shortly after 2010, the talk changed, and began to become more serious. Miller was chairman of the board at the time, and said the board began discussing funding around 2011, after a proposal from a building firm in Charlotte.

If the property was built in downtown Salisbury, the firm told them, they could get a grant to cover part of the cost. It was a proposal the board took to the Rowan County Board of Commissioners.

But getting them to understand the need for a central office turned out to be an uphill battle.

“It was like pulling hen’s teeth,” Wright Norman said.

Overcash said that the Board of Education took several proposals to the county commissioners, one after the other. A property in the 300 block of S. Main St. was considered, but rejected by the county commissioners, who then withdrew a promised $6 million for the office. The City of Salisbury offered a lease purchase agreement with the system for the same property but it, too, failed.

After several fruitless attempts and much argument, the system in 2013 entered into mediation talks with the county commissioners.

“That’s a time I would like to forget in a lot of ways,” Wright Norman said.

In January of 2014, after months of late-night meetings, heated arguments and dead ends, Wright Norman asked Willis Whichard, a lawyer who served both as an appellate judge and as a state legislator and who mediated the talks, to declare an impasse between the two groups.

“We believe we have exhausted our opportunities for dialogue and reaching agreement,” Miller said at the time.

However, Whichard refused to grant the impasse, and instead requested that the two bodies meet again. After an April 14, 2014 meeting, the boards at last came to an agreement. The county commissioners would provide $40.5 million to the school’s capital needs project, taken from sales tax, and the board would put forward a site for the proposed central office. They chose the 500 block of N. Main Street.

“It wasn’t everything we wanted, but it was something we could live with,” Wright Norman said.

By that point, the school system had proposed more than a dozen sites for the centralized office since 2005. But the 2014 agreement was the closest they’d come since the suggestion of the old Winn-Dixie off Jake Alexander Boulevard in March 2008, Miller said.

On Friday, almost a year after the system broke ground on the North Main site, the doors of the Wallace Educational Forum were thrown open. The building is smaller than the original 62,000 square-foot plan, but it’s home. Miller said he felt the money given to them by the county was well spent, and that each party “got a pretty good bang for our buck.”

“We certainly needed the consolidation, and I think this was the best option,” Wagner said.

Wagner originally voted against the project.

It’s the end of a long, hard road, and something that many see as a reason for celebration. Public Information Office Rita Foil is glad that the decades long conversation can be laid to rest.

Overcash said he’s “tickled to death” that battle is over, and the prize is won. Miller said he hung on throughout the late-might meetings and fruitless, frustrating discussions because he knew the increased efficiency and improved working conditions would result in better management of the education of the system’s 20,000 students. Wright Norman says that was always the goal, and it was something she never lost sight of in her 20 years on the Board of Education.

Not everyone is happy about the move, Moody said, and Wright Norman acknowledges that it will take the community some time to adjust. But the system hopes that Salisbury-Rowan will see the new Wallace Educational Forum as not just an office building, but an extension of the community and a reflection of the pride its people take in education.

“I’m happy to see this day come, and it’s been a long time coming. But change is like that, it takes a long time,” Wright Norman said