Tar Heels get even, win at Duke 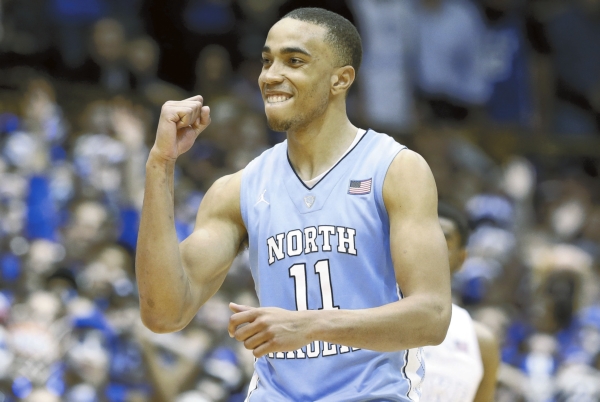 DURHAM (AP) — North Carolina rebounded from a loss to its most despised rival by, well, rebounding.

Brice Johnson had 18 points and 21 rebounds, and the eighth-ranked Tar Heels dominated the glass and held on to beat No. 17 Duke 76-72 on Saturday night and lock up the top seed in the Atlantic Coast Conference Tournament.

North Carolina never trailed and rode its inside game, building a 64-29 rebounding advantage while outscoring Duke 42-20 in the paint.

“We dominated the paint like we needed to. And we didn’t go away from it,” senior guard Marcus Paige said. “We kept going to the paint, kept going to the paint and we were able to hold off their runs. They made a couple of runs where they made a lot of 3s, but that’s what Duke does. We were able to stay composed in a hostile environment and show what this team is really made of.”

“After all we’ve been through the last four years, it feels great to be able to walk off this court and say we won the ACC,” Johnson said.

Grayson Allen scored 29 points while Luke Kennard added 20 for the Blue Devils (22-9, 11-7), who have the No. 5 seed in the league tournament. They gave themselves a chance to win by hitting 13 3-pointers.

“That’s what we do — 3s and free throws are kind of how we have to score,” coach Mike Krzyzewski said. “We’ve got to do what we have to do, and it’s won 22 games, it’s made us a very good and tough team.”

Allen and Kennard hit them in the final 20 seconds, with Kennard’s making it 72-70 with 9.3 seconds left.

“On the second trip to the line, I knew it was over,” Paige said. “And it started to sink in that after all we’ve been through, we finally got over the hump and became an elite team and made a run that elite teams do. Man, it felt good.”

Justin Jackson added 13 points and Paige finished with 11 for the Tar Heels, who earned just their second victory at Cameron Indoor Stadium since the Tyler Hansbrough-Danny Green-led group went 4-for-4 here from 2006-09, and their first since 2012.

Duke escaped the Smith Center last month with a 74-73 win after the Tar Heels — who never could put the Blue Devils away in that one, and paid dearly for it — had a shot blocked on the game’s final possession to end it.

For a while, it looked like North Carolina would decide Round 2 much earlier, twice pushing its lead into double figures in the opening half while completely owning the paint — holding a plus-20 rebounding margin at halftime and outscoring Duke 26-8 in the paint.

But the Tar Heels missed their first 11 shots of the second half against the 2-3 zone the Blue Devils ran to mitigate that interior disadvantage. That gave Duke a chance to come back.

Johnson, when told that he had 21 rebounds — or, eight fewer than the entire Blue Devils team: “Oh, so I almost outrebounded them. Cool.”

Duke announced before the game that senior forward Amile Jefferson would miss the rest of the season with a broken right foot on the advice of team doctors. The school says it will seek a medical hardship waiver that would allow Jefferson to return next year. Jefferson averaged 11.4 points and 10.3 rebounds in the nine games he played before suffering the injury in December.

North Carolina: Johnson had 47 points and 40 rebounds in the two Duke games. … The Tar Heels’ rebounding total was a season high. … Former stars Hansbrough and Marvin Williams, both now with the Charlotte Hornets, watched from behind the UNC bench.

Duke: Allen was 11 of 28 from the field but only managed two free throws, hitting one. … This was the final game at Cameron for Plumlee, the youngest of three brothers who played here. Duke has had a Plumlee on every team since 2008.