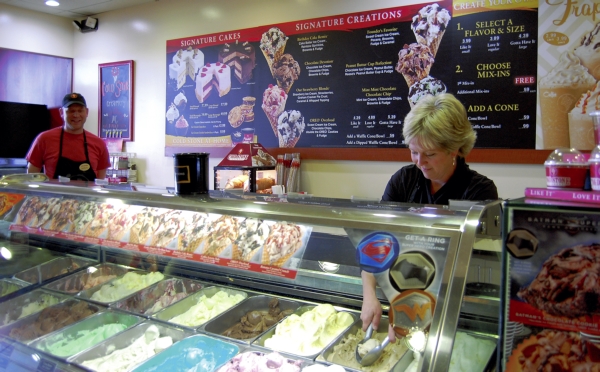 Amanda Raymond/Salisbury Post Sharon Smith (right), one of the owners of Cold Stone Creamery at 343 Faith Rd., scoops up coffee-flavored ice cream to pass over to Anthony Goodnight (left), store manager, who will mix in the rest of the ingredients to create one of the store's specialties. Salisbury's Cold Stone was recently awarded with the Store of the Year award.

Cold Stone Creamery, at 343 Faith Road, was awarded the Store of the Year award on Feb. 25. One store from the North Carolina and South Carolina regions is chosen based on excellence in overall operations, customer service and sales growth.

Sharon and Richard Smith took over the store in March of last year and have lived in Salisbury for 11 and a half years. They have two children, Hannah and Griffin.

Sharon Smith actually grew up on a dairy farm and scooped ice cream with her parents at different events.

“So when I saw the ice cream (shop), I thought, ‘That’s definitely something I can support,’” she said.

When the Cold Stone was put up for sale, Smith and her husband thought it would be a great family venture.

“We were looking for a business that we would enjoy doing as a family,” she said.

Smith said Griffin, who is in fifth grade, likes to help make waffle cones and serve customers in the afternoons, and Hannah, 16 and a little busier, helps out during special events.

Smith has been active in the community during her years of living in Salisbury.

She goes to a church in Salisbury, has served on PTA boards and has volunteered her time in other ways.

Smith has been able to give back to different community organizations, especially the school system, through the store. Fundraising nights for different schools around the county are hosted by the Smiths’ Cold Stone, during which a certain amount of proceeds are donated to the school.

Sometimes a teacher, coach or other staff members from different schools act as guest scoopers during events.

“When you have those guest speakers, it brings in a lot of people and it’s just a lot of fun,” she said.

“Whenever the schools ask us for something, we’re definitely willing to help,” she said.

Anthony Goodnight, store manager, has worked at the store for four years.

He said since the Smiths took over, there have been many positive changes.

“The whole atmosphere turned positive and business picked up,” he said. “They are very well known in the community, so that alone really helped our business.”

The previous owners also owned other Cold Stone stores and did not live in Salisbury, so they could not spend as much time at the Salisbury location.

Smith said receiving the award was validation of the hard work they have put into providing customers with the “ultimate ice cream experience,” a slogan Cold Stone uses.

Smith said she did not win the award on her own. She said she has a good employee base at the store, and Goodnight works behind the scenes to keep everything rolling.

“We want our crew to be extremely friendly, and we want them to engage with every customer and take the time to talk to every customer, even when it’s busy,” she said.

Goodnight said the award was unexpected.

“I think that was the best thing about it because we were not expecting an award like that,” he said.

Smith said she felt honored to win the award, especially because the store was competing with larger markets, including Charlotte, Raleigh, Wilmington, Myrtle Beach and Charleston.

“It truly shows that hard work that we’ve put in and that it paid off,” Goodnight said.

Smith said they are planning a customer appreciation day on April 10 from 2 to 5 p.m. to celebrate their one-year anniversary. There will be a magician, face-painting and ice cream specials.

Families celebrating special events in their children’s lives often visit the store, and Smith said those families and other repeat customers make the whole experience special.

“We feel like we’re a part of those celebrations,” she said.

Smith said she hopes to grow the catering and mobile side of the business and continue to focus on community service.

“The people have really supported us,” she said.