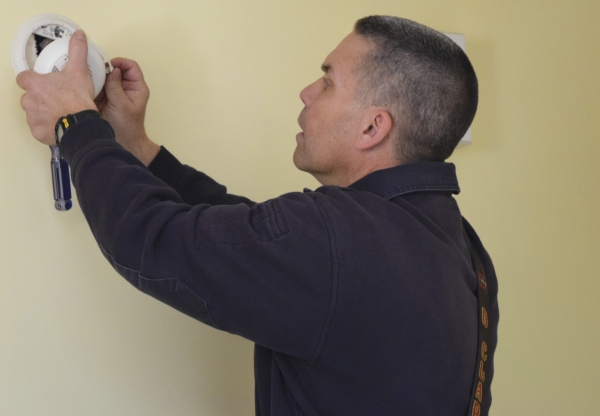 SALISBURY — On Union Church Boulevard, Salisbury City Councilwoman Maggie Blackwell knocks on a yellow door. Three Salisbury City Fireman stand behind her on the steps and the shaded walkway, but there’s no movement behind the door’s diamond panes. Blackwell counts to ten, shrugs, and hangs a pamphlet advertising free smoke alarm installations on the door knob.

Saturday the Elizabeth Hanford Dole chapter of the American Red Cross teamed up with the Salisbury Fire Department to do free smoke alarm installations and checks in the Morlan Park neighborhood.

The day is part of a national Red Cross campaign to raise awareness and prevent house fires, and is almost always held in a neighborhood where there’s been an injury or death due to fire.

In Morlan Park, it was a house fire that occurred in January. On the morning of Jan. 25 Carlon Gibbs Hillian, 55, was found lying in the yard outside her burning Gold Hill Drive home. Hillian suffered severe burns on her back and arms, and was taken to the burn center at Wake Forest Baptist Hospital for treatment.

“There’s already an awareness in the neighborhood, so that tends to open doors,” she said.

Saturday, approximately 30 volunteers canvassed the area, offering to install a ten-year lithium ion battery smoke detector, free of charge. If the home already had a smoke detector, they’d offer to replace batteries or check the alarm.

“They are going all different directions,” LeMaster said.

A functioning smoke detector is a tool that can save people’s lives by alerting them to danger and giving them time to get out of the house, Hurlocker said. Especially because few fire deaths are the result of burns.

“It’s not the fire that actually kills someone,” Hurlocker said. “It’s the smoke inhalation.”

Caleb and Tommy Byerly drove all the way from Troy to participate in the door-to-door campaign. Caleb, 6, holds a bottle of water and walks beside his grandfather. Tommy Byerly uses a cane and walks slowly – but he’s determined.

Byerly said he belongs to the Red Cross chapter in Troy, but heard about the event and thought it would be a good idea for Caleb and his brother, aged 9, to learn the value of helping others.

Daniel Michael said that some people answered the door warily, waiting to see what he’s selling. When he tells them the detectors are free, he’s seen a lot of people open up.

On Morlan Park Drive, Michael runs into another group, knocking on doors on the other side of the street. Gloria Woodard, a Red Cross volunteer, has three firemen in tow. She says they’ve installed five or six detectors so far.

“We started out head strong,” she said.

Michael tromps through the grass between two homes on Carolina Boulevard, drill in hand. Behind him, Clarisa Sifford carries a bag of smoke detectors and pamphlets that bear a Red Cross number.

They climb the steps to the front door of a duplex, where Michael rings the doorbell. No one answers, and he folds a pamphlet through the hook on the screen door.

“That’s the thing about going out on a Saturday,” he said. More often than not, no one was home.

On the other end of Carolina Boulevard, Blackwell said that she’s run into two kinds of people today: those who aren’t home, and those who welcome the volunteers in. Blackwell heard about the event in an e-mail, and decided to volunteer.

“I thought it sounded like a good thing,” she said.

At the campaign’s headquarters in Morlan Park, LeMaster keeps tabs on the eight volunteer groups, hands out bags of smoke alarms and keeps a record of houses visited. She said she was determined that everyone have the opportunity to get a smoke alarm.

“We’re gonna go until we run out of smoke detectors, until my volunteers quit, until it’s night time,” she said.

The Red Cross handed out 56 smoke detectors Saturday, and more than 100 educational packets. If you need a smoke detector or CO2 detector, please call the Red Cross at 704-347-8366 or send an e-mail to NCPrepares@redcross.org.