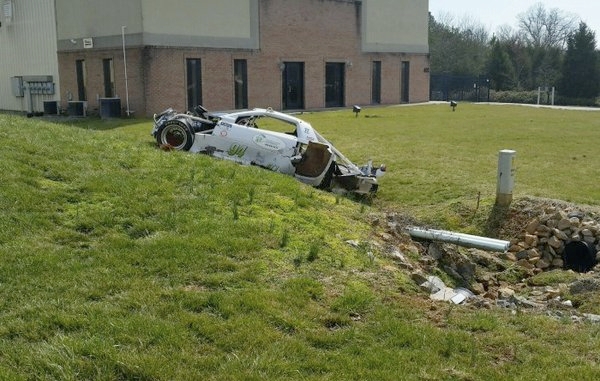 The driver was killed when this custom-made car crashed on Performance Drive. Photo courtesy of WBTV

MOORESVILLE — An Ontario man died in Mooresville on Saturday while test driving a race car, the N.C. Highway Patrol said. Trooper J.D. Best said he would not release the man’s name until he’d spoken to the family, en route from Canada.

Shortly before 10:59 a.m., a man was test driving a race car on Performance Road off of Highway 152. Best said the driver lost control of the vehicle as he came back to the straightaway and ran off the right side of the road. The car, a “custom made” vehicle with a Camaro body style, went through the yard of a nearby company and hit an embankment. Best said the driver was ejected from the vehicle, and then the car rolled back on top of him.

Authorities said the man was dead when the N.C. Highway Patrol, fire and EMS reached the scene.

Best said the man owned the race car, as well as a business on Performance Drive.

Performance Road, next door to the Mooresville Dragway, is lined with race shops, and Best said the circular road is often used to try out cars.

“A lot of those race shops use that road to test drive their cars and make sure they’re working properly,” he said.

Generally, he said, those test drives consist of checking brakes and making sure the engine is running properly — not for racing. But he said speed was a factor in Saturday’s accident.