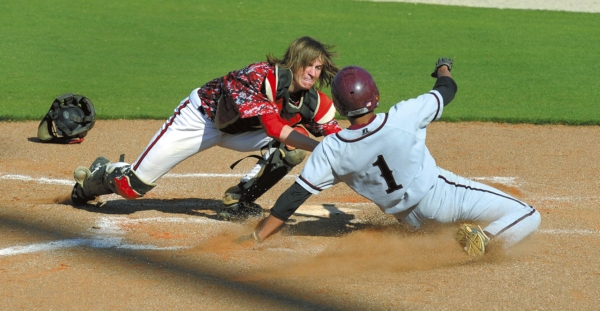 LANDIS — The 1-2-3 double play South Rowan turned to escape a sixth-inning, bases-loaded mess was not only pretty, it was pretty big.
But that one was just the appetizer for the unusual 3-2-6 twin killing the unbeaten Raiders executed to survive another bases-loaded jam in the seventh.
Winning reliever Dillon Norton threw the pitches that led to both double plays, and catcher Shaggy Wyatt was right in the middle of both defensive gems. They led the way as South beat Concord, 4-2, in roller-coaster South Piedmont Conference action here Friday night.
“Well, we were in some little situations that we had to get out of,” Wyatt said. “We fought our way out of them and we won against a good team.”
Norton had a superb game for South, driving in three runs as well as pitching two high-pressure innings.
“I was missing my spots a little bit and Concord was getting base runners,” Norton said. “But Shaggy was great. Our defense was great.”
South (3-0, 2-0 SPC) won despite getting only four hits against Concord starter Will Capron, who pitched into the sixth inning.
“I don’t think the four hits on the scoreboard was indicative of how we swung it,” South coach Thad Chrismon said. “We hit a lot of balls hard. If you keep squaring balls up, sooner or later you find some holes.”
South starting pitcher Walker Joyce was good for five innings, but a double by Matt Panner set up a two-run first inning for Concord. The runs scored on Sam Rodgers’ groundout and a two-out error.
“Both those guys we put on the mound competed,” Chrismon said. “After they got two runs early, Walker held it right there and gave us a chance to come back.”
Austin Chrismon’s leadoff double helped the Raiders get one run back in the third. He advanced to third base on a long fly by Wyatt and scored on Norton’s sac fly. Norton should’ve been out on a foul popup prior to his RBI, but he took advantage of getting an extra swing.
South made it 2-2 in the fourth, scratching a run with a hit batsman, two walks and a wild pitch.
When Joyce lined into a double play with the bases loaded in the fifth, it appeared that it might not be South’s night, but the drama was just starting.
Concord filled the bases in the sixth on a walk and singles by John Vincent and Hunter Hinson, but Norton made the pitch he had to make to No. 9 hitter Dubby West. West slapped the ball right back to Norton, and the Raiders smoothly turned the 1-2-3.
South scored the runs that won the game in the home sixth. Chrismon’s infield popup fell safely and Wyatt whacked an opposite-field hit to set the table for Norton. Norton’s liner to left was a slicer toward the line and it fell just out of the reach of Concord’s Hinson. Both runners scored.
“I was just hoping we’d finally get one to drop in,” Norton said.
Concord (1-1, 1-1 SPC) filled the bases with none out in the seventh on Carter Mozingo’s infield hit, a walk and a hit batsman, but once again Norton got exactly what he needed. This time it was a one-hop grounder to first. The Raiders easily got the force play at home, and then Wyatt started looking for more. The Concord runner between first and second had slowed down, and Wyatt’s strong peg to shortstop Peyton Penninger beat him to the bag for the second out.
“You’re always looking because you never know and I saw we had a play,” Wyatt said. “You’re always looking for another out.”
He got a big one.
“Shaggy’s a senior,” Coach Chrismon said. “He made a very aware play.”
There was still one more out to get. Norton got it on a routine grounder to third, and the Raiders had won a serious struggle.
“We had to make a lot of defensive plays to win,” Norton said. “But that’s kind of what we do.”