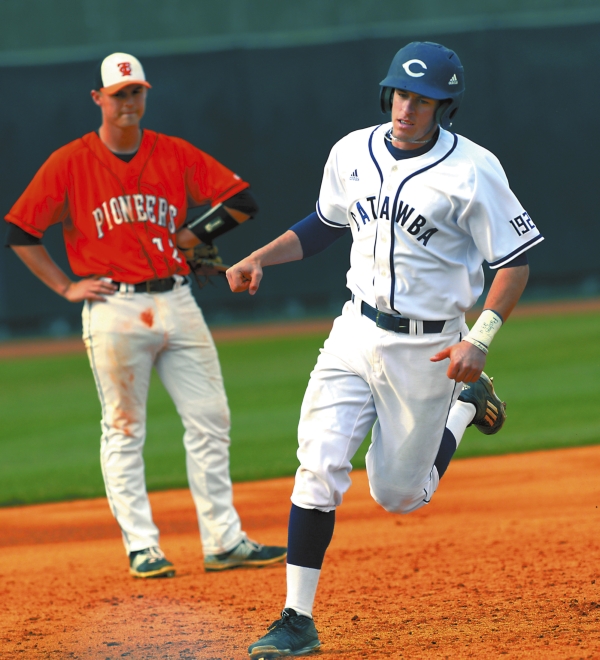 Wayne Hinshaw/for the Salisbury Post ... Catawba’s Luke Setzer rounds third base on one of his two home runs on Saturday afternoon against Tusculum at Newman Park. Setzer had five hits during the doubleheader, as Catawba won the second game, 9-5, after dropping the opener, 12-9. Tusculum third baseman John Topoleski looks on.

SALISBURY — Friday was the worst day of Luke Setzer’s baseball life — 0-for-7 with a school-record-tying six strikeouts in a 13-inning win — but Saturday brought redemption for the Catawba right fielder.
Setzer, who starred at East Rowan High, had five hits, belted two homers and didn’t strike out in Saturday’s doubleheader against Tusculum at Newman Park. He also played superb defense.
“I guess it would’ve been easy not to put Luke back out there today, but he’s not a guy who’s going to sulk even when he goes 0-for-7,” Catawba coach Jim Gantt said. “He’s still going to be all about the team and he’s still going to play great defense and give you everything he has.”
Setzer’s two long balls — both rockets to left-center — nearly sparked a Catawba comeback from an eight-run deficit in the opener, but the Indians lost, 12-9.
With Setzer contributing two hits and two walks in his four trips to the plate, Catawba won the chilly, seven-inning nightcap, 9-5, and took the series, two games to one, from the Pioneers. It was a big series to get. Tusculum often provides Catawba’s toughest opposition in the South Atlantic Conference.
“Just a crazy series,” Catawba third baseman Jake Kimble said. “We never gave up. We came back twice Friday. We almost came back in the first game today.”
Setzer defined never giving up. He couldn’t wait to get back to the ballpark Saturday for a fresh start.
“Tusculum has some great arms, but six strikeouts in one game was still tough to swallow,” Setzer said. “Coach Gantt tells us how we come back from adversity is what makes us who we are. I was upset, but I wasn’t discouraged. I was ready to get back up on the horse.”
The Catawba strikeouts in a game record that Setzer tied was set by Jeff Simpson in a 14-inning game against Wingate in 1987.
Simpson was at Newman Park on Saturday and he told the Setzers how he came back from that rough game to get three hits in his next one.
As Setzer’s second homer of the day disappeared over the wall on Saturday, Simpson tipped his cap to Scott Setzer, Luke’s father.
Dylan Richardson also swung a hot bat in that first game, producing three hits, including a homer, and driving in three runs. Will Albertson, Bryce Fowler and Kyle Smith added two hits each, but the Indians and losing pitcher Russ Weiker couldn’t overcome shaky defense. Five errors were scored, and there were other mistakes.
“We battled today and these guys have battled hard every game all season,” Gantt said. “But we also do some of the worst things you’ll ever see. It’s concerning. I don’t mean to be overly critical, but sometimes it looks like we’ve never practiced.”
Catawba (9-8, 3-3 SAC) came back from that ugly outing to win the nightcap, although it took nearly three hours to play seven innings. There were a lot of full counts and a lot of base runners. Tusculum (12-6, 1-2 SAC) stranded 12. Catawba left 10 on base.
Catawba got a bases-clearing, opposite-field triple from Kimble in the first inning for a 4-1 lead, but it was a 5-all game heading to the bottom of the fourth.
Richardson and Malachi Hanes walked to start Catawba’s decisive, four-run fourth inning. Chance Bowden, Setzer and Kimble drove in runs before the speedy Kimble scored on a wild pitch for a 9-5 lead.
Riley Myers started on the mound, Avery Bowles was credited with the win, and Bryan Blanton closed, but the key hurler for Catawba was lefty reliever Michael Elwell, who got a strikeout with the bases loaded to end the fifth and a punch-out to strand two more Pioneers in the sixth.
Elwell threw crisp, knee-high fastballs to get a lot of strike ones, but his money pitch is a wicked curveball that he has the confidence to throw in 3-2 counts.
“My first inning, the curveball wasn’t as good as it usually is, but then I went down to the bullpen and (pitching coach) Sandy Moore made a good adjustment,” Elwell said. “It was better my second inning and I got a big strikeout with the curve.”
Many curves were thrown on a marathon Saturday, but the day will be remembered mostly for Setzer, who kept plowing straight ahead. He showed everyone how to come back from a negative experience.
“Luke had himself a heck of a day,” Kimble said. “He came out here with a positive attitude and he just tore it up.”
•••
NOTES: Former West Rowan star Harrison Baucom made his first start in center field for the Indians. …Will Albertson has been moved to the leadoff spot in the lineup. He hit his sixth homer on Friday and his on-base percentage is .542 … Tusculum’s Creighton Wilke is batting .559 and hit two homers in Saturday’s first game…. Catawba goes to Pfeiffer on Tuesday and hosts Lock Haven on Wednesday. Next weekend’s SAC series is at Anderson.