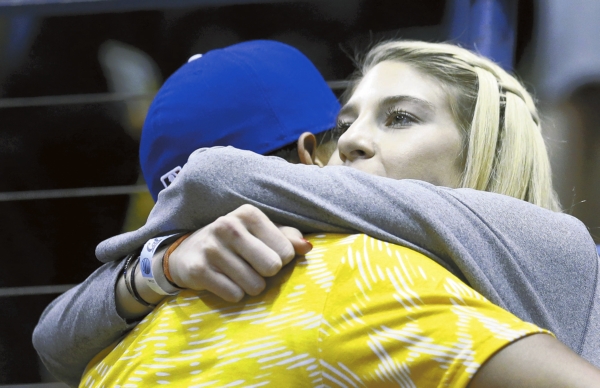 In this Sunday, Feb. 28, 2016, photo, California volleyball player Savannah Rennie is embraced prior to California's NCAA college basketball game against Southern California in Berkeley, Calif. Rennie is headed to Indiana University this Sunday to await a liver transplant for a rare disease that has kept her off the court, and determined to play volleyball again surrounded by a campus community that is supporting her every step of the way. (AP Photo/Ben Margot)

Her health concerns began back home and continued once she arrived in Berkeley to get going in her classes at the University of California and prepare as a freshman volleyball player for the Golden Bears. There were unbearable headaches and high fevers. Nausea and loss of appetite. Soreness and then pain in her abdomen. Body aches and weight loss.

Not just the flu. Rennie knew that much.

Months later, she is headed to Indiana University this Sunday to await a liver transplant because of a rare disease that has kept her off the court for Cal and thrown her life a curveball at all of 19 years old. She remains steadfast, determined to play volleyball again surrounded by a campus community that is supporting her every step of the way — through the tears, the missed classes, the isolation and fear of leaving her friends behind with no firm return date.

“Volleyball’s my rock,” Rennie told her doctors, who assured her that her chances of playing again are strong. “I will be back. People are like, ‘It’s goodbye.’ It’s not bye. See you later.”

Rennie was diagnosed in September with congenital hepatic fibrosis with portal hypertension. The disease doesn’t typically affect someone her age but rather newborns or seniors.

Rennie tells herself each day to just stay healthy enough so she will be ready the moment a liver becomes available. No infections. Last month while in Indiana for tests and evaluations ahead of her transplant, Rennie was hospitalized despite being on antibiotics.

“Last year at this time, I was perfectly normal. I look normal on the outside. People say, ‘You look great,’” she said. “But I’m not, at all, by no means, nowhere near OK. Every day, I pray that I don’t get sick again. That’s how it’s been since the summer. Physically, it’s just a toll because I don’t know ever what’s going to happen.”

Recovery time after the surgery is about three months — “less than an ACL,” Rennie notes of the reconstructive knee operation.

“We are all behind you!” Larson wrote. Former gold medal-winning beach and indoor volleyball star Karch Kiraly sent prayers and thoughts from the rest of the Rio Olympics-bound women’s national team he coaches.

“It’s unreal to have that volleyball support,” Rennie said. “They’re looking out for me and having my back.”

Her mother started a GoFundMe page to raise money for the enormous medical expenses. The effort had raised more than $70,000 of the $100,000 goal as of Thursday night. The Oregon State volleyball team gave $175. NBA champion Golden State Warriors coach Steve Kerr and his wife, Margot, donated $1,500.

Walsh Jennings tweeted the link to Rennie’s fundraising page and asked for support.

“Now I can sleep at night knowing that I have an army of people behind me, helping me take care of her,” Rennie’s mom wrote, thanking everyone for the support as she and her daughter leave California “to wait for her new gift of life.”

Once at Indiana University next week, Rennie will wait. She will be treated by a renowned liver transplant doctor — and she has been told her process should take less than a few months. In the Bay Area, by comparison, it could be several years, she said.

She can’t wait to feel right again, be a volleyball player again. Right now, she is anxious about being away from her friends and Cal support system. Rennie withdrew from her spring semester classes but won’t be behind when she returns because of her early start.

Last weekend, she made the rounds on campus — from basketball games to the baseball field to watch and root for her fellow student-athletes who have so positively cheered her plight.

“There’s no place I’d rather be than here,” Rennie said through tears at Haas Pavilion. “Even though I can’t play volleyball or do anything like that, being in practice and being in weights is what drives me, like ‘I want to do this again.’ It keeps me going. It’s my little chunk of time in the day I’m super happy.”

When she turned 19 in December, Rennie wrote on Twitter, “All I want for my birthday is volleyball and for my life to be like it was a year ago.”

As terrifying and tough as that life is right now, Rennie reminds herself that she will soon be on the path to physical recovery and emotional healing. And, she hopes, back to playing volleyball for the Bears come fall.

“I’m just preparing myself for the comeback that’s not going to be easy,” she said. “I just have to keep reminding myself this is for more than just myself. It’s for my family, my friends, my sisters on the volleyball court, my coaches, my community, my college, for anybody who has a transplant or needs one. To represent a liver disease that’s very rare. I want to make it a point that anything’s possible. You can come back from anything if you really want to, and not to give up.”