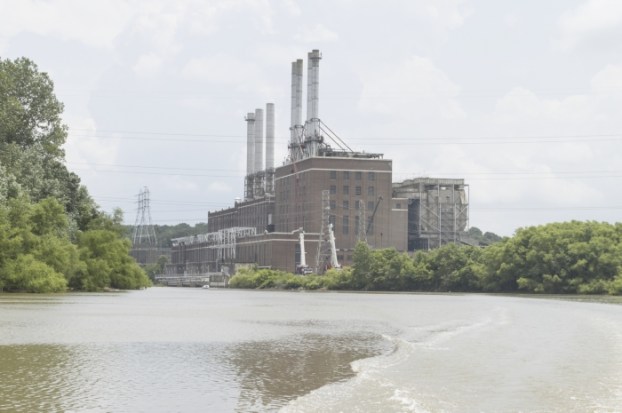 A coal ash retainment pond at the Buck Steam plant along the banks of the Yadkin River just east of I-85 bridge in Rowan County as seen from the air. Photo by Jon C. Lakey, Salisbury Post.

Wastewater mentioned in the violations contains toxic levels of heavy metals. However, a statement issued by Duke Energy said the leaks aren’t new.

“Even the state environmental regulator acknowledges that seeps occur at every earthen impoundment, and those at ash basins are not impacting water quality,” the company said in its emailed statement.

“We are doing everything the state has asked to address seeps, including cataloguing, testing and monitoring them,” the company said. “Nearly two years ago, the company included seeps in permit applications to the state and has been working through the process ever since.”

DEQ spokesman Mike Rusher said seeps do occur at earthen dams. Rusher, however, said “ideally there wouldn’t be any seeps.”

The violations come as state officials are finalizing priority levels for closure of Duke Energy’s coal ash ponds. State officials have scheduled public meetings around North Carolina to gather input on priority levels, and the meeting for Buck Steam Station will be Feb. 22 at Catawba College’s Center for the Environment in Salisbury. Buck Steam Station has received a preliminary, low-to-intermediate priority ranking. It’s unclear whether Friday’s violations will affect the rating.

Attorneys from the Southern Environmental Law Center say the violations and potential fines are too little and too late.

“Citizen conservation groups and SELC brought illegal discharges to DEQ’s attention three years ago, yet it has take DEQ three years to take this proposed action,” attorney Frank Holleman said in an emailed statement. “But still, at many of these sites, DEQ is only proposing to issue fines.”

Holleman said fines won’t protect the public from pollution because Friday’s letters don’t require that coal ash be removed. In Buck Steam Station’s case, coal ash could be left in coal ash ponds near the Yadkin River and capped in place.

“It is way past time for DEQ to do its job, not treat any community as a low priority,” Holleman said.

“According to Duke’s own assessments, the seeps at Buck are discharging 70,000 gallons per day,” Blake said. “Yet, DEQ did not consider this seepage in the so-called key factors that it relied on in its proposed prioritization decision at Buck.”

To be clear, Duke Energy already discharges water. Friday’s violations are for leaks that haven’t been authorized by state regulators. At Buck Steam Station for example, A three-pond system slowly seaprates any coal ash constituents from water before discharge into the Yadkin River.

Mike Rusher, a spokesman for DEQ, said Friday’s violations aren’t directly linked to a cleanup process required by the 2014 Coal Ash Management Act. As part of the act, all coal ash ponds in North Carolina will be given a rating and prioritized for cleanup. A high-priority rating requires the company to excavate ponds. A low-priority rating allows Duke to cap coal ash in place.