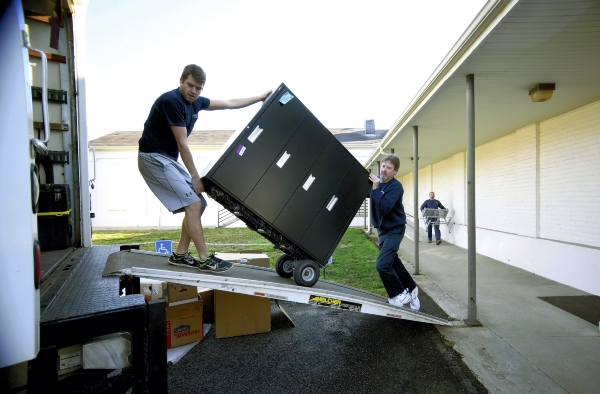 JON C. LAKEY / SALISBURY POST Brandon Fortson and his father Jimmy wheel a large file cabinet in the moving truck at the Ellis Street office for the Rowan-Salisbury Schools on Friday morning. Rowan-Salisbury School System Administration staff work with movers from Salisbury Moving and Storage to relocated the offices from Ellis Street and Long Street into the newly completed Wallace Educational Forum on North Main Street on Friday morning. Staff is expected to work through the weekend to get the building open for normal business by Monday morning. Friday, March 4, 2016, in Salisbury, N.C.

After more than 20 years, Rowan-Salisbury Schools finally has a central office. Since 1989, system administration has operated out of five buildings scattered around Salisbury and East Spencer. After long talks, debate, mediation with the County Commissioners and a near lawsuit, the district broke ground on a site in the 500 block of N. Main St. in April 2015. There are still a few rough edges to smooth — landscaping that needs to be done and technology to be installed — but the building is live-in ready, and Assistant Principal Anthony Vann has received a temporary certificate of occupancy. At full completion the Wallace Educational Forum is priced at a little over $9 million. On Friday morning, the system began the long process of moving into its new home.

“A lot of folks thought this day would never come,” Vann said.