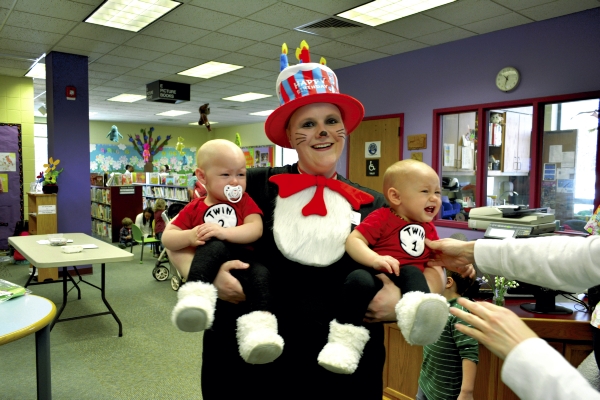 Dressed as the Cat in the Hat, Smart Start Rowan's Mary Burridge did not have much luck holding Twins 1 and 2, Ava and Anna Gill, who were not keen on being temporarily taken away from their mom, Elizabeth. Photo by Susan Shinn, for the Salisbury Post.

We love to read Seuss here and there,

We love to read Seuss everywhere!

To the library for the Dr. Seuss bash,

With the library and Smart Start, there’s always fun in store!

Profuse apologies to Dr. Seuss, to be sure. But more than 150 children and their caregivers did certainly have a blast Wednesday morning at the annual Dr. Seuss Birthday Bash, hosted by Smart Start Rowan at Rowan Public Library’s headquarters.

“This is one of our biggest events,” noted Amy Brown, Smart Start Rowan’s executive director.

And the event keeps getting bigger every year, said Mary Burridge, Smart Start Rowan’s program manager, looking darling – but still keeping her cool despite the big crowd – all while sporting a red and white hat, and whiskers on her face.

Meanwhile, children’s librarian Robert Jones was busy corralling the children over to a corner of the children’s room so that they could listen to three Dr. Seuss books.

Led by Jennifer Nicholson, the library’s new youth services supervisor, the children sang a rousing chorus of “Happy Birthday” to Dr. Seuss, who was born March 2, 1904. Dr. Seuss birthday celebrations are a perennially popular activity in libraries this time of year.

“His rhymes are so catchy and his pictures are so colorful,” Nicholson said of Seuss, when asked why the children’s book author remains a huge hit with children.

Jones reminded the children that many times when Seuss needed a particular rhyming word, he simply invented one if the need arose.

“If you don’t understand a word, it’s OK, because he probably made it up,” he said.

Jones then read “Yertle the Turtle” and two other selections before the children had time for crafts and snacks.

Twin 1 and Twin 2, also known as Anna and Ava Gill, were having none of Burridge’s greetings as the Cat in the Hat.

The girls, 13 months, shrieked when taken briefly from their mother and grandmother for a quick photograph with Burridge. They calmed down immediately when returned to their family members.

“They go to Baby Time here at the library,” said their mom, Elizabeth.

“And even if Beth works, I bring them,” Janet Gill added. “So they come no matter what. They love it here, and I’m so grateful the library does everything they do. The staff members are all wonderful.”

“They’ve grown up coming to the library,” Elizabeth Gill noted.

This was Victoria Demich’s first trip to the library, at 1 month, 5 days of age, said her mom, Marlen Ordones. The young mom is also a part of Smart Start Rowan’s Circle of Parents support group.

Jones continues to read Seuss books to children because of their social value, he said. “In ‘Yertle the Turtle,’ we have a character who’s like a tyrant, and who wants to be higher and higher. Then we have a turtle called plain ol’ Mack, who burps, and Yertle’s empire falls to pieces. The book is about freedom for all living creatures.”

Another Seuss book Jones read was called “What Was I Scared Of?”

“People are often afraid of things they don’t know about,” Jones pointed out.

After story time, Greg Mixson sat down and read Seuss’ “How the Grinch Stole Christmas” with daughter Maggie, 4. The girl said that the holiday story was one of her favorite Dr. Seuss books.

“We make it a point to read at least one book a day,” Mixson said.

Maggie’s older brother, her dad said, is 7. “Her brother really loves to read, and he’s doing fantastic with it.”