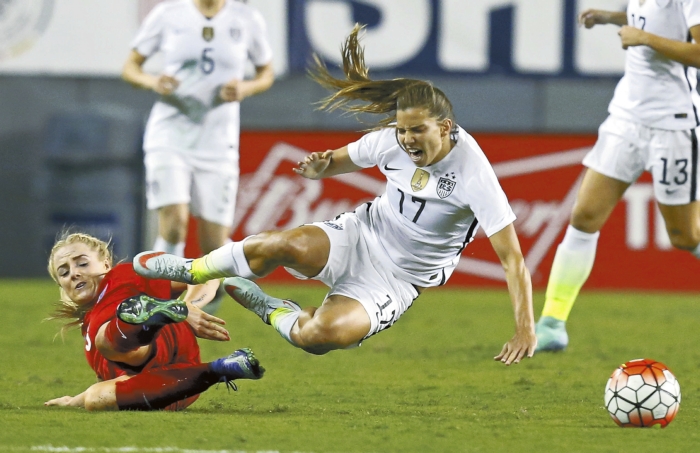 Dunn entered in the 67th minute and made it 1-0 with a shot into the upper corner of the net five minutes later.

“A lot of people were like, did you mean to put it there?” Dunn said. “And of course, initially you say yes. But no. In my head, I was like I saw the goal, aimed for it, and it just happened to go in.”

“She’s done well, she deserves to be in here,” Ellis said. “This is what she can pull out, these exceptional efforts.”

Alex Rodriguez and CC Sabathia were among a group of New York Yankees at the match, which drew an announced crowd of 13,027. The Yankees are holding spring training in Tampa for the 21st consecutive year.

Solo made a diving save on Toni Duggan in the second half en route to her 145th international victory.

“We’re disappointed with the result,” England coach Mark Sampson said. “We’ll get there. We wanted to come here and win. It was a tight game. Credit to America.”

The U.S. had the only shot on goal during a scoreless first half.

Alex Morgan sent a shot wide early off a cross from Mallory Pugh.

The U.S will go against France Sunday in Nashville. England and Germany will also take part in a doubleheader.

The cup wraps up Wednesday in Boca Raton, Florida, when the U.S. meets Germany and England plays France.