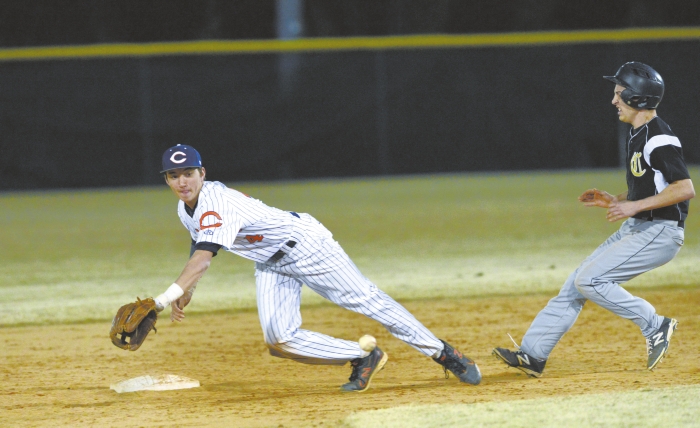 Wayne Hinshaw file photo/for the Salisbury Post ... Just a sophomore, Carson’s Owen White (4) can hit, pitch and play shortstop for the Cougars. Above, White is shown diving for a ball during a game last year against Concord. As a freshman, White was 8-2 on the mound and also batted .374.

CHINA GROVE — If you held a draft of Rowan County baseball players, Carson’s Owen White would be the first pick.
White is a three-way player, one of the county’s best pitchers, hitters and fielders. On top of that, he’s only a sophomore.
As a varsity freshman, White went 8-2 with an 0.85 ERA and 76 strikeouts and was a strong candidate for pitcher of the year and player of the year in the South Piedmont Conference and Rowan County.
White pitched a shutout in a 1-0 win against Enka in the first round of the state playoffs. He also batted .374 with 34 hits and 20 runs scored.
Assuming good health for White, Carson, which began the season ranked ninth in 3A, will be an important factor in the 18-game South Piedmont Conference race. Carson will have a great chance to win whenever White starts on the mound. His glove and bat will impact games when he doesn’t pitch.
“Owen is going to be Owen,” Carson coach Chris Cauble said.
The other returning standout for the Cougars is all-county center fielder Michael Morrison. Morrison (.348, 29 runs, 16 steals) triggered the offense for a team that went 17-10 and tied for second in the SPC with a 10-6 record.
“We go into the season with two proven hitters — Owen and Morrison,” Cauble said. “But we’ve got a lot of other guys who have hit at different times and we believe they’ll have good seasons.”
The key losses are Heath Mitchem, who batted an amazing .524 on his way to player of the year laurels in the conference and the county, and infielder Matt Saul, who gave the Cougars some power.
Experienced returners include Ryan Bearden (.306, 12 RBIs), Ben Shoaf (.250, 4 RBIs), Brycen Holshouser (.236, 13 runs) and Brandon Mock (.216, 8 RBIs).
Morrison, Mock and Bearden are captains.
Mock, headed to Guilford, is being looked at as a breakout performer and is expected to occupy left field and the critical No. 3 hole in the lineup behind Morrison and White. Morrison and White are going to be on base a lot, so Mock will get a chance to drive in a lot of runs.
Bearden is moving from catcher to first base, while Shoaf will be the third baseman. Those two will hit in the middle of the lineup.
“They’ve got a lot of power,” Cauble said.
Holshouser or Aldyn Blackwelder will be in right field. Pearce Wilhelm is being counted on as the No. 1 catcher. If Bearden is needed behind the plate, Maddux Holshouser, Tanner Christy or Jared Lamb will get a shot at first base.
There are a lot of candidates for second base, including Cameron Prugh, Grayson Whicker, Logan Ridenhour and Alex Shumaker. Whicker swings the bat well enough that he’ll also get DH starts.
The pitching staff, obviously, will be anchored by White. After him, there are a lot of potentially good hurlers, but no sure things.
Maddux Holshouser, a sophomore lefty, begins the season as the No. 2 starter, with Prugh right behind him.
“Our top three pitchers are sophomores,” Cauble said. “That’s good for the future.”
Christy, a senior, was 3-3 last season with a 2.56 ERA, and is trying to overcome a football injury. Bearden, Rowan County Defensive Player of the Year in football, is a great athlete and probably fires the ball as hard as anyone in the county. He’ll be a factor if he can throw strikes.
Caleb Hall, Brandon Newton and Mock also are ready to help on the mound. Hall was instrumental in an opening-night win against Central Cabarrus.
“We’ve got a lot of pitchers and we’ll need them,” Cauble said. “There are going to be weeks with three conference games.”
Cauble is 154-87 at Carson and seven straight Cougars’ teams have made it to the state playoffs. The program has had team that have ventured as far as the fourth round (2014).
For the first time since Carson opened, Cauble won’t have Dwayne Fink as an assistant coach. Fink has retired.
“Dwayne was with me from the start,” Cauble said. “He was a big part of our success.”
Cauble’s staff will be Daniel Pinyan and Brett Mulkey, with Mulkey, a former North Rowan star, doing most of the work with the pitching staff. Rob Hales is coaching the jayvee team.
Cauble agrees with just about everyone else that defending champ West Rowan is the team to beat in the SPC, but the Cougars have the pitching and defense to contend. If those guys in the middle of the lineup hit, the sky’s the limit.
“West is the favorite,” Cauble said. “The next five or six teams are pretty even. We should be in that mix.”