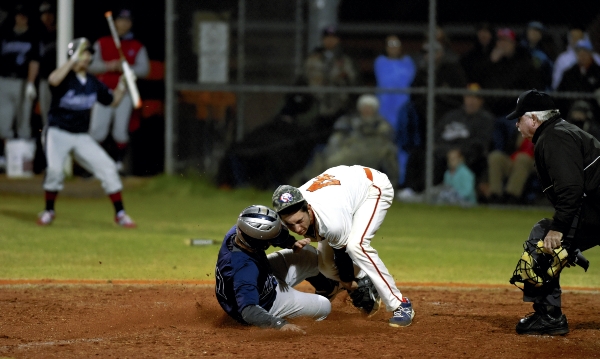 CHINA GROVE — It may be time to recalibrate expectations for the East Rowan baseball team.

Two games into their SPC season, the Mustangs are unbeaten and haven’t allowed a run.

“A lot of people in the community doubted us,” catcher John Owen said Friday night after East scored twice in the top of the sixth inning and gained a 2-0 victory at Carson. “We’re young, but we’re definitely not middle-of-the-pack.”

East looks like a legitimate contender after besting Carson ace Owen White, who yielded only two singles and struck out nine in 6 1/3 innings. Ironically, it was an error charged to White on the game’s decisive play that doomed the Cougars.

“You start conference (play) on Tuesday and go right to the fire,” coach Chris Cauble said after Carson (2-1, 1-1) collected only two hits against winning pitcher Hayden Setzer. “It’s like a playoff atmosphere right from the beginning — a well-played game both ways.”

It wasn’t so much an early-season showdown as it was a seven-inning test-of-nerves. White used a upper-crust fastball to retire nine of East’s first 10 batters. The hard-throwing right-hander ran into trouble in the top of the fourth inning, when East’s Ike Freeman singled, Chandler Blackwelder reached on an error and Jordan Wise coaxed a walk, loading the bases with two out. But White escaped unharmed when Nathan Hill lofted a routine fly ball to center field.

Carson had threatened against Setzer — a sophomore left-hander who pitched five shutout innings in his varsity debut — in the second inning. Designated hitter Grayson Whicker blooped a one-out single to center but was forced out at second base. With two away, Ben Shoaf stole second base and then third, before Setzer fanned Pearce Wilhelm on a sweeping, 2-2 fastball.

“That pitch just had a lot of run on it,” said Setzer, who struck out five and threw first-pitch strikes to 12 of the 18 men he faced. “I just threw it outside and let him chase it.”

Winning coach Brian Hightower addressed Setzer’s effort with the calmness of a movie usher. “He did a pretty good job,” he said. “I think he had command of both his fastball and his curveball. When you can keep them off stride and you’re hitting your spots, you’ll be OK. We’re just preaching that you’ve got to be able to get strike one.”

The Mustangs finally cracked the code against White — who fired first-pitch strikes to 20 of 25 East hitters — in the sixth. Owen opened the inning with a ground ball single up the middle. Courtesy runner Colby Myrick entered the game and advanced to second base on a passed ball and to third on a wild pitch. There was still nobody out when Freeman drew a walk on a pitch that deflected off the mitt of Wilhelm, Carson’s junior catcher. Wilhelm scurried after the ball and flipped it to White, who was covering the plate. The ball appeared to beat Myrick, who hesitated coming down the line, but his hard slide dislodged the ball from White’s glove and Myrick was ruled safe.

“(Myrick) hesitated a little longer than I wanted him to,” Hightower said. “Then he decided to go. It was a clean play. (White) did a great job blocking the plate, but he just slid in and knocked it loose.”

Cauble had a different view from the Carson dugout. “The umpire said he didn’t see any malicious content to it and called it a legal play,” the coach said. “In my eye, the kid knew he was out and came in high and hard. To me it didn’t look like he slid until he was past the (plate). That’s why I was arguing.”

East nourished its lead two batters later when Jackson Justus lifted a sacrifice fly to right. Owen pitched two innings of hitless relief to earn a save, thanks to nice defensive plays by outfielders Will Brown and Blackwelder. He finished the game by showing Wilhelm a called third strike on a 2-2 curve.

Afterward, Hightower didn’t want to talk about East’s expectations. “We play every game one at a time,” he said. “All we do is come out and try to win. That’s all we’ve ever been about.”