Life is a Cabaret at the Meroney Theater 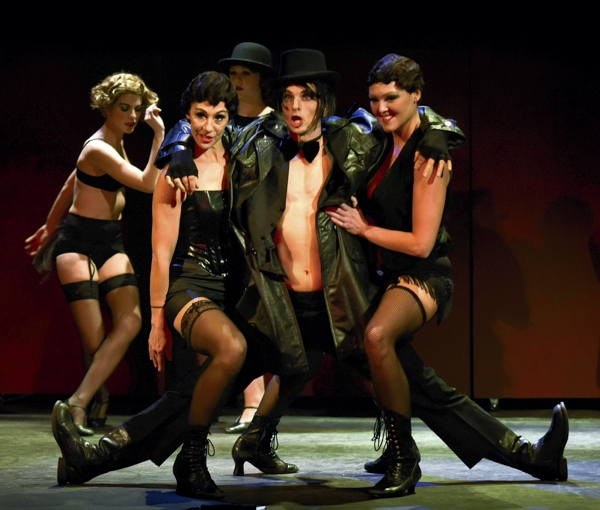 The scene is a sleazy nightclub in Berlin as the ’20s are drawing to a close and the city is in the midst of a Post-World War I economic depression. Into this world enters Clifford Bradshaw (Tim Campbell), a struggling American writer looking for inspiration for his next novel. On his first night in Berlin, Cliff wanders into the Kit Kat Klub, a sleazy nightclub overseen by the strange, omniscient and gender-bending Master of Ceremonies (Aaron Coulson). Here, Cliff meets Sally Bowles (Emily Ramirez), a vivacious, talented cabaret performer, and an utterly lost soul. Sally and Cliff begin a relationship, however, as time passes, the situation in Berlin changes from exciting and wild to ominous and violent, forcing Cliff to make some important decisions.

Set in early 1930s Berlin as the Nazis are rising to power, “Cabaret” is a musical based on a book written by Christopher Isherwood, with music by John Kander and lyrics by Fred Ebb. The original 1967 Broadway production became a hit, inspiring numerous subsequent productions in London and New York, as well as the 1972 film by the same name, starring Liza Minnelli.

The Piedmont Players Theatre version, which opens at the Meroney Theater next Thursday, is based on the 1998 revival which played for 2,377 performances becoming the third longest running revival in Broadway musical history.

The cast of the Piedmont Players production is comprised of PPT veterans joined by a number of new faces, including the talented Aaron Coulson, playing the role of the emcee. PPT’s third Meroney production of the 2015-2016 season reunites the creative team that brought you recent record-breaking musicals “Cats” and “Chicago.” Director and Choreographer Tod A. Kubo, musical director Mike Wilkins, and set designer Reid Leonard, will again combine their incredible talents to bring another show to the Meroney stage that will once again raise the bar for local theatre.

As with  “Chicago,” Wilkins and the entire orchestra is onstage for “Cabaret” with some actors actually becoming part of the orchestra at times. With a dose of provocation and a score featuring songs that have become classics of the American Musical Theater, Cabaret is a fierce, meaty musical that pushes all the boundaries.

PPT presents A Time To Kill

“A Time To Kill” is the incendiary story of a Southern community torn in half by an unspeakable crime. As the shocking news hits the public, small town America becomes the center of a media storm, where innocence is the victim, race is on trial and lives hang in the balance. This is the first time a work of Grisham’s has ever been adapted for the stage.