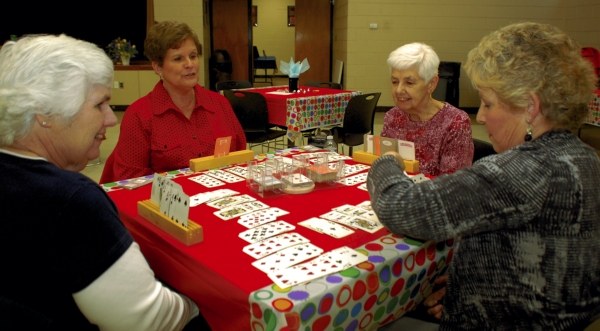 SALISBURY — It sounds like something you’d write on your tombstone, and with these women, who love playing their card game of hand and foot, maybe it will be.

“You can’t look at your foot until you’ve played your hand,” Dee Anderson said Wednesday, describing a crucial rule.

Anderson was playing hand and foot — much like canasta, for comparison’s sake — with Sandy Hamilton, Joan Hamilton and Nancy Andrews. The women were part of the good-sized crowd gathered Wednesday at Salisbury Civic Center for the Salisbury-Rowan Newcomers Club’s fifth annual game and card party.

Anderson actually was a guest of the other three club members, who all live in the same Gables neighborhood. Every Tuesday, Sandy, Joan and Nancy play hand and foot at someone’s house in the Gables.

As usual, they played this Tuesday, then for several more hours Wednesday afternoon at the Newcomers Club event, then Wednesday night at Sandy and Joan’s house party.

“When you’re with friends,” Sandy Hamilton said, “it’s never too much.”

And that’s an overriding theme — friends and friendly faces — of the Salisbury-Rowan Newcomers Club, which uses the annual game and card party to raise money for its sole designated charity, Food for Thought.

Food for Thought provides school children who are identified as “food insecure” with backpacks full of food for their weekends away from school.

Some 30 percent of the students in Rowan-Salisbury Schools — about 9,000 kids — are considered food insecure. Food for Thought has a three-year plan trying to reach as many of those students as possible, and Herndon said thanks to groups such as the Newcomers Club, Food for Thought is making some headway.

As of now, it supplies 530 backpacks, and Herndon wants to reach 750 by the end of the school year.

Every dollar raised at the Salisbury-Rowan Newcomers Club’s game and card party Wednesday afternoon went to Food for Thought. Ticket sales accounted for close to $2,000, and Herndon said that alone will provide eight more children with weekend backpacks for a whole school year.

The 80-member Newcomers Club donated $2,700 to Food for Thought from its game and card party last year, and it expected to surpass that total once all the money from silent auctions and door-prize tickets was factored in Wednesday.

Most club members and their guests Wednesday were playing some version of bridge and hand and foot. Dominoes also are a favorite game among the club members — and sometimes Scrabble.

Almost everyone who attended Wednesday’s event brought a gift bag, which were awarded at day’s end. Pretty much everybody leaves with something, Carolyn Peka said. No one goes hungry, either, because the club members bring food to share.

One wall of the Civic Center was prizes; an opposite wall, food.

Peka learned about the Newcomers Club after she relocated here from Louisville, Ky., but something you learn quickly about the club is you don’t really have to be a newcomer to Salisbury or Rowan County.

Joyce Powel lived in China Grove and is a Rowan Countian, born and raised. After her husband died about six years ago, Powel looked for a change, and found it with the Newcomers Club, She was instrumental in planning Wednesday’s game and card party.

“I moved to Salisbury and life began anew,” Powel said. “It (the club) changed my life.”

The club has regular monthly meetings with speakers and programs in the Stanback Room at Rowan Public Library. Newcomer friendships also have spawned many card clubs, book clubs and travel clubs.

“I’ve met people here who will be friends for the rest of my life,” Powel said.

Though the club doesn’t rule out men, all the members at present are women. And many of those women like to play bridge. Powel made it a point to take bridge lessons when she joined the Newcomers Club, “and I’ve been playing ever since.”

Joy Hamilton teaches beginning bridge at the YMCA on Thursday mornings. Her Thursday afternoon bridge club has about 20 members.

“Bridge is big in Salisbury,” Joy Hamilton said. She learned at the elbows of her mom, dad and grandparents and started playing when she was 12.

Shirley Goodman actually sneaked in a man to her card table Wednesday. Once a month, John Hoppe plays with the Newcomers Couples Bridge Club. Goodman’s husband was home sick, so she asked Hoppe to accompany her to the game and card party at the Civic Center.

Hoppe finds it hard to turn down a chance to play bridge.

“He’s an exceptional player and a nice gentleman,” Goodman said.

There’s another inscription many men wouldn’t mind on their tombstone.

Fighting isolation, hunger: Meals on Wheels is more than…