Salisbury student will be first graduate of Catawba’s conducting cognate 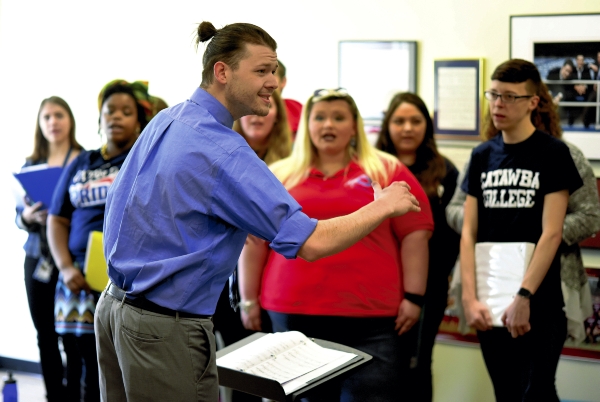 SALISBURY — The first time Hunter Safrit took the stage as a conductor, he thought it was the scariest thing he’d ever done.

“There’s this feeling all artists get when they go to show their souls on stage . . . and it’s this little, tight, almost butterfly in your stomach, and it never quite goes away,” he said.

He was worried he’d miss a cue, and an audience full of strangers made him uneasy. But in front of him were the familiar faces of the ensemble, people he’d spent hours with, practicing until the music sounded the way they wanted it to.

He hasn’t looked back since.

In May, Safrit, of Salisbury, will be the first student to graduate from Catawba’s music education conducting cognate.

During music education classes at Catawba, Safrit, a cellist, said he began asking instructors if he could take the podium and try out conducting.

“I kind of just wiggled my way in there,” he said.

It’s an ambition that began, in many ways, with an episode of Looney Tunes featuring Elmer Fudd and Bugs Bunny performing their antics against the musical backdrop of Rossini’s overture to the “Barber of Seville.” Safrit said that’s the moment he fell in love with classical music.

“I remember rewinding the tape over and over to hear the ‘Barber of Seville,’” he said.

Later, when his family bought a car with a back-seat radio, Safrit tuned into classical music while his parents listened to country and rock in the front seat.

“My Chesney went to Chopin and my Osbourne went to Offenbach,” he said.

And when the conducting cognate launched last year, he jumped at the chance. As he began to focus on conducting, he grew further from playing the cello – an instrument he picked up in high school after seeing the film ‘The Secret Life of Bees.’

On graduation day, his diploma won’t specifically reflect his study of conducting – but he’ll have the experience.

So far, Safrit has conducted six wind ensemble concerts and six choral performances at Catawba. He hopes his time in front of his peers will give him an edge in the “cutthroat” grad school application process – it’s not an opportunity many undergraduate students receive.

“I’ve been given a lot of opportunity here at Catawba,” he said.

In addition to instructors letting him have podium time – both before and after the cognate launched — Safrit receives personal conducting lessons as part of his studies, and has been given the opportunity to build an ensemble from scratch.

Safrit says he loves the communication and partnership that occurs between a conductor and the ensemble. It’s a co-leadership, he said, which is something a lot of people don’t understand.

“My job as conductor is not to tell someone what to do or what to play, but to make sure everyone is on the same page,” he said.

And when everyone is working together, that’s when the magic happens.

“The conductor is the facilitator of good music,” he said.

Safrit is a proud resident of Salisbury, and said that if he could “replace my blood with Cheerwine,” he would. For him, the small town holds other opportunities – like a chance to intern in the office of the Salisbury Symphony.

After he graduates, Safrit plans to take a year off and take private lessons in voice, piano and conducting.

He wants to go to grad school and get a master’s degree in choral and symphonic conducting, and hopes to pursue a doctorate in musicology. But he loves teaching. He’d like to teach at a university and conduct at the same time.

Safrit will be conducting his senior recital piece, a 45-minute-long performance of the “Holberg Suite” by Edvard Grieg, on April 26 at 7:30 p.m. in Keppel Auditorium.