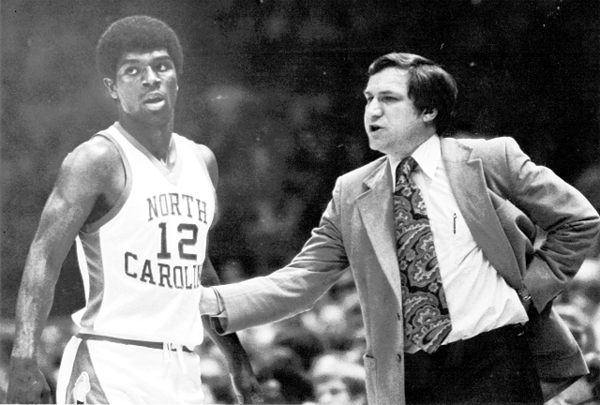 Photo courtesy of goheels.com ... A great duo of the mid-1970s, UNC point guard Phil Ford, left, and head basketball coach Dean Smith. With Ford at the point and Smith at the helm, the Tar Heels were the national runner-up in 1977.

KANNAPOLIS — A.L. Brown boys basketball coach Shelwyn Klutz spotted Phil Ford and made a quick spin move from a hallway into a conference room.
A few seconds later, Klutz had his arm draped around Ford’s neck, and phones were snapping photos.
Ford is a walking, smiling photo op. He turned 60 a few weeks ago and the Afro hairstyle of his youth has been replaced by a shaved head, but he’s in great shape and still instantly recognizable.
For guys like Klutz, who were kids in the 1970s, there weren’t any bigger athletic idols than Ford.
While other Tar Heels went on to do larger things in the NBA, you could make a reasonable argument that Ford, as far as his collegiate career, was as good a player as UNC has ever had and as good a point guard as the ACC has ever had.
Ford had zero career dunks, but he was an amazingly quick, smart and dynamic point guard who made the cover of Sports Illustrated. He was a master of coach Dean Smith’s delay offense in the pre-shot clock days. It was known as the Four Corners.
With the ball in his hands and with his teammates spread widely around the court, Ford was unstoppable, and he’s a reason the shot clock became a part of college basketball.
When he finished at UNC in 1978, Ford was a three-time All-American, a national player of the year, and the Tar Heels’ career leader in points and assists. The first freshman to start the first game of his career for Smith, he also won an Olympic Gold Medal on a Smith-coached team in 1976.
So why was Ford in Kannapolis?
Well, an interesting event is coming up to A.L. Brown on Thursday, April 21, and Ford will be coaching in it.
Officially, the group of seniors from the Big Four schools that Ford will coach is known as the “ACC Barnstorming Tour.” This is the 38th year for the Barnstormers, who have made previous stops at Catawba College and even visited A.L. Brown in 1984.
UNC’s Matt Doherty, never known as a defier of gravity, won the dunk contest at A.L. Brown that year, much to the dismay of Duke fans.
On learning that amazing fact, Ford commented with a laugh, “Not a strong dunk contest.”
UNC’s Brice Johnson and Marcus Paige and Duke’s Marshall Plumlee are the headliners on this year’s barnstorming roster. Wake Forest’s Cody Miller-McIntyre, who began his prep career at Northwest Cabarrus, also is on board.
“We’ve got one of the strongest rosters we’ve had,” Ford said.
The ACC seniors will be taking on a team of “local all-stars” that is expected to include current A.L. Brown players, former A.L. Brown players and perhaps faculty members. Maybe they’ll even get a little help from their neighbors.
The cost for a general admission ticket that will get you in the door at historic Bullock Gym is $10.
There also are a limited number of VIP tickets available for $50. VIP tickets include a reserved front row seat for the game and admission to a post-game reception with the players. VIP ticket holders are guaranteed at least one autograph from an ACC player or coach.
Doors open at 6 p.m. A large crowd is expected. The game tips at 7:30 p.m.
The spectacle includes a 3-point shooting contest and the obligatory dunk contest.
So will Paige pass the ball to Plumlee?
Ford says he will.
“There’s always a mutual respect among the Carolina and Duke players,” Ford said. “Sometimes they’re almost in awe of each other’s talent.”
If you’re wondering why the Barnstormers picked A.L. Brown as one of their 10 scheduled stops, there’s no simple explanation. Miller-McIntyre’s roots are part of it.
It also brings Ford back to his earliest days. He was born in 1956 at Concord’s Cabarrus Memorial Hospital, a few miles from A.L. Brown. That’s a facility now known as NorthEast Medical Center.
Ford spent some early years in Kannapolis before moving to Summerville, S.C., and later to Rocky Mount, where he became a basketball and baseball prep star.
Pet Sumner, who’s in charge of a tour that will barnstorm as far as Avery County and Tarboro, said A.L. Brown had everything he looks for as a host — a big gym, plenty of parking, and an athletics director (Noah Lyon) who was enthusiastic about bringing the event to his school.
“A lot of people ask us to come,” Sumner said. “It’s a very interactive, fan-friendly event. We’ll use local water boys and girls. Fans might be called on to shoot a free throw.”
A portion of the proceeds go to Ronald McDonald House. A.L. Brown also will get a share.
Lyon said the event brings nothing but positives to Kannapolis and A.L. Brown.
“It’s great that people will get a chance to see ACC-level players up close,” Lyon said. “I think they’ll be amazed at how big they are and how athletic they are. It’s going to be a great opportunity for our own athletes to play against guys with that kind of size and ability.”
As far as who’s going to win the game, that’s probably a done deal.
“Our refs come with us,” Sumner said cheerfully.

Softball: Nesbitt gets chance to play and coach overseas