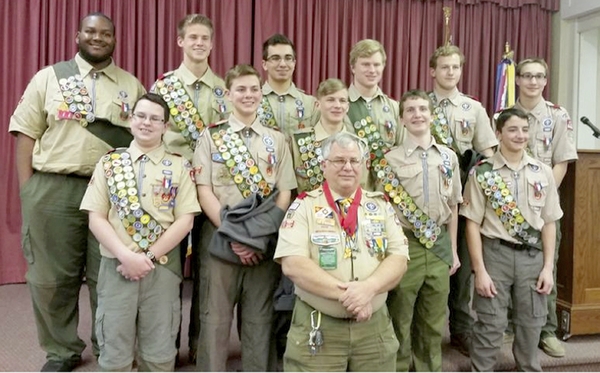 Troop 443 celebrated its 90th anniversary and recognized 11 new Eagle Scouts, bringing the total number of Eagle Scouts to 150 in 90 years.

Scouting’s goal is for the boys to learn outdoor skills, responsibility, respect, faith, ownership and pride, life lessons they will use forever. The secret to every good Scout is a great leader. Troop 443 has had Henry Trexler as its Scoutmaster for over 34 years.

In 1929, Scoutmaster Clifford Peeler awarded the first Rowan County Eagle Scout to Clyde Sowers under Troop 43. Thirty-four Eagle Scouts were awarded 1929-1981. Henry Trexler received his Eagle in 1968 with Troop 443. In 1981, he became the Scoutmaster of Troop 443. He has had 116 boys earn the highest rank of Scouting under his leadership.

The troop is not just about the boys doing the merit badges and moving ranks but it is about having fun while doing it. The troop is a boy-led troop with guidance of parents, grandparents, other adults and Eagle Scouts from their community.

The troop has gone on trips and adventures such as whitewater activities 98 times, camporees at all levels from district, council and national 119 times, summer camp 57 times, and almost every time awarded best troop. The troop has been to Pamlico Sea Base four times and on historical trails 120 times.

In the last six years, the boys have earned many awards, including 2,164 merit badges, 469 rank advancements, 1,059 special awards at camps and other events and 168 service star awards for a total of 3,860 awards. It was also awarded the Journey to Excellence gold level unit award all five years that the award has been presented to troops.

Several of the Scouts from Troop 443 have branched out into the community to create units with their own churches. It is not only a community honor to be a Scout, but it is a national honor. Most employers will choose an Eagle Scout over candidates with 4.0 GPAs today because they know what skills they hold and the accomplishments they have achieved. If you see Scouts, thank them for their dedication and determination to better their local community.