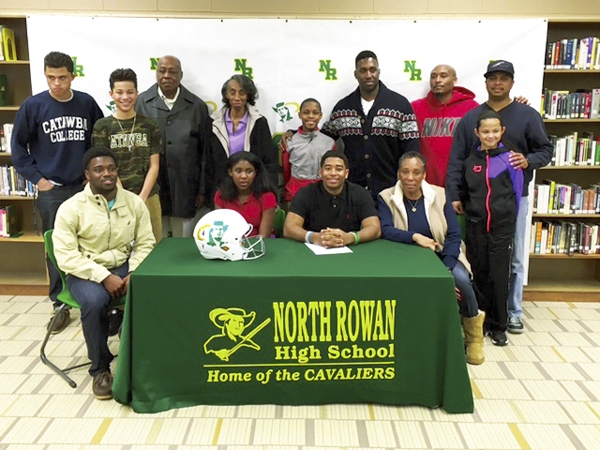 SPENCER — Head football coach Ben Hampton reminded the folks gathered in North Rowan’s media center — most of them teenage athletes — that only 6.5 percent of high school players go on to become members of a college team.
North Rowan senior Eric Gibson is part of that elite 6.5 percent. He signed with Catawba last week.
“Playing at the next level has been a dream since I was 15,” Gibson said. “I’m excited to play for Catawba because it’s close to home. When Coach (Curtis) Walker welcomed me with open arms, I knew Catawba was my best bet to keep playing.”
Gibson has been a fine high school player. At 5-foot-11, 195 pounds, he’s fast and strong. He’s getting a chance to help the Indians and to get a college degree because he possesses off-the-field pluses that separate him from a lot of other fast, strong people.
“Eric is a great student,” Hampton said. “He understands academics first, athletics second.”
Gibson is a member of the National Honor Society. Besides his lofty grades, coaches will cheerfully talk for hours about his character.
“The thing that stood out about Eric is how coachable he was,” North defensive backs coach Rodney Goodine said. “When you show guys or tell guys how to do something, a lot of them just nod their heads like they understand, and then they go out and make a mistake. Eric always listens. If he doesn’t understand something, he’s going to ask questions until he does.”
Gibson didn’t play for North until his senior season. He was a starter at Salisbury before he came to North. North’s coaches wish they’d had him for more than one year, but he did a good job of learning a new system and new responsibilities in a short time.
“He was tough and he was physical for us,” Hampton said.
Gibson made 63 tackles as a senior (41 solos, 22 assists) in a role that was part linebacker and part strong safety. He made more than his share of tackles at the line of scrimmage and was credited with 13 tackles for loss.
Gibson blocked a punt against Davie. He forced fumbles with hits against Carson, Statesville, Lexington and Thomasville, and he recovered a fumble against Lexington.
Statistically, his best outings were a 12-tackle effort against Davie and a nine-tackle game against Statesville.
“The game I remember best was the one at Statesville, because it was such a great environment to play in,” Gibson said. “My biggest play was the forced fumble when we beat Lexington. (Linebacker) Javine Goodine got the ball on that fumble, and I remember how excited we were celebrating on the sideline.”
North Rowan has so many Catawba connections that it’s surprising more Cavaliers don’t end up there.
Rodney Goodine was a first-team All-American at Catawba, and North’s defensive coordinator Steven Williams was a fine player for the Indians.
Then there’s Hampton. He played for Walker when Walker was on David Bennett’s coaching staff at Coastal Carolina.
“I’ve got a lot of role models who went to Catawba and were successful at Catawba,” Gibson said. “I know I’ve got things to work on to play college football. I’m fast in a straight line, but I’ll be playing in space more at Catawba than I did in high school. I’ll be working on my agility, on turning my hips and changing direction.”
Gibson likely will become a strong safety at Catawba, and he’s also the kind of athlete who could carve out a role as a fearless hitter on special teams.
Gibson plans to major in business or sports medicine. Whether he becomes an impact player or not, Catawba will be a better football program for having him.
“We like to sign local kids, and when we got to know Eric, we knew this was a guy we really wanted,” Walker said. “He can play and his character is outstanding.”