Fighting isolation, hunger: Meals on Wheels is more than just a meal 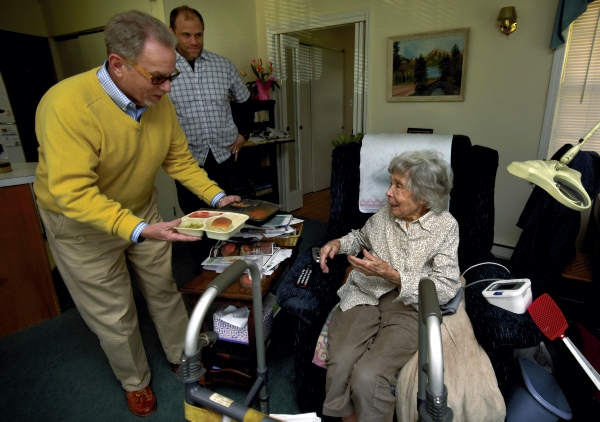 SPENCER —  When Spencer Mayor Jim Gobbel dropped by Tuesday morning to deliver a Meals on Wheels lunch, Louise Richardson placed him within minutes.

The mayor was, she realized, son of Bob and Joanne Gobbel who used to live down the street. “I know them well,” Richardson said.

In fact, she and a late husband built the house the Gobbels lived in before she moved to this house in 1966.

It’s not often that the mayor stops in to deliver lunch, so Louise, who will be 97 later this month, was happy to ask him and Meals on Wheels volunteer Chris Laxton in for a chat. Laxton, a member of Oakdale Baptist Church, says Louise is always the first stop on his route.

“I look forward to it,” Louise said of the Meals on Wheels visit. “They’re always pleasant, smiling, and I know I’ll get something good to eat.”

Gobbel was among several other mayors, town officials, volunteers and staff who met at the Meals on Wheels headquarters earlier Tuesday to kick off  the annual “March for Meals.”

March for Meals is a monthlong, nationwide celebration of Meals on Wheels and the homebound and vulnerable seniors, handicapped and convalescing clients who rely on it for social contact and lunches every day.

Meals on Wheels has served Rowan County since 1976. It delivers 220 meals a day over 27 Rowan County routes, touching all 10 municipalities, including Kannapolis.

The United Way agency delivered some 55,000 meals in 2015, a 6 percent increase from the previous year.

Rita Sims, executive director of Meals on Wheels of Rowan Inc., said the agency serves three important functions for its clients: food, safety and socialization. “This whole month is all about that,” Sims said.

The daily lunches provide a third of the clients’ nutritional needs in a day. The volunteers delivering meals also are knocking on their doors Monday through Friday.

In addition, the volunteers tend to deliver the same routes and become familiar with their clients, who welcome the visitors sharing pieces of the outside world with them.

Kannapolis Mayor Pro Tem Tom Kincaid, who owns assisted-living facilities, said he knows from experience that the meal is secondary to the visit.

“Socialization is just as important as medication,” Kincaid said.

Richardson confided to Gobbel and Laxton that sometimes her meals need a dash of salt and maybe a little relish. “I doctor it up,” she said.

She also freezes any leftovers she has and later she’ll mix everything up into a big pot for soup.

“You grow up in the Depression, and you learned to do that,” she said.

A nurse by training, Louise once was director of nursing at Davie County Hospital, the head nurse in obstetrics at Rowan Memorial Hospital and a nurse at the Salisbury VA Hospital until her retirement.

She has outlived three husbands, and she has daytime and nighttime caregivers, Cheryl Misenheimer and Juanita Pickler, respectively. Louise kids that she bosses them around a lot, but she quickly reveals, too, the women are like family.

Misenheimer has been with her in some capacity since 1990.

It’s amazing what you can learn about a person in a short amount of time.

“These are the kind of people I like to talk to,” Gobbel said, “because I know I’ll get good, factual information.”

At the morning’s next stop, Gobbel delivered the meal for an old school buddy and Marine veteran of the Vietnam War, Albert “Smootie” Watkins.

“Jimmy, how you doing?” Smootie asked as Gobbel walked onto the front porch, where Watkins was enjoying the mild temperatures. “I’m glad you’re mayor.”

Smootie gained some notoriety in his day as drummer for the original Drifters. He also was drummer at times for Johnny Maestro (of  “Sixteen Candles” fame) and Randy Travis.

He lives by himself now, smokes a lot — a habit he picked up in the Marines — and has his interactions with the Meals on Wheels volunteers daily.

He doesn’t pull punches when asked how the meals are.

“I ate better C-rations in the Marine Corps,” he said. “They fed you good.”

Many of them had personal stories of how Meals on Wheels had served people in their families. Moody said his grandparents were clients. Alexander said she had an aunt and uncle in Florida who had depended on the daily service.

“I know how valuable it is,” Alexander said.

As Gobbel did, both Alexander and Mallett accompanied Meals on Wheels volunteers on  routes in their towns Tuesday.

Taylor, who will be doing it later this month, is a 12-year veteran of making Meals on Wheels stops as mayor.

“It will open your eyes if you’ve never done it before,” Taylor said. “It will really touch your heart.”

Mallett has a 93-year-old aunt who relies on Meals on Wheels every day.

Mallett said she has a sister who retired Monday from the state of North Carolina, and the sister told Mallett she planned to sleep for a month (she had been a third-shift worker), “and then I’m going to work for Meals on Wheels.”

“I’ll be back next year, maybe with my sister,” Mallett said.

“I enjoy going out in the community and visiting our seniors,” Mallett said. “They remember you, so that gives you a good feeling.”

Meals on Wheels has several “March for Meals” activities during the month — days when community leaders such as the mayors, area pastors and, on March 31, the Little League Softball World Series champions from Rowan County help to deliver the meals.

On Thursdays in March, participating area restaurants donate a percentage of their sales to Meals on Wheels.

Next Tuesday, March 8, the 8th Annual Meals on Wheels Barbecue Fundraiser will be held from 11 a.m.-6:30 p.m. at First Presbyterian Church in Salisbury.

With the mayors’ help, Rowan’s municipalities will be reading “March for Meals” proclamations for their towns into the public record this month. Alexander did this at Salisbury City Council’s meeting Tuesday.