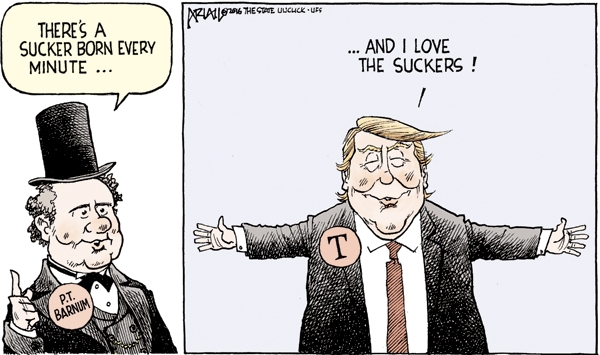 RALEIGH — During a recent book tour across North Carolina, I had occasion to visit with thousands of politically active people, most of them conservatives. The most frequent question I received from audiences was what I thought of Donald Trump.

I told them. Donald Trump is a dangerous charlatan, a bully who deftly uses false promises, egregious lies, and malicious attacks to manipulate people to his advantage. His marks include media figures desperate for ratings, political has-beens desperate for relevance, and voters desperate for someone to restore American greatness after two unpopular presidencies, two costly wars, and nearly two decades of economic stagnation.

It’s a swindle. It’s a world-class con. And for conservatives in North Carolina and around the country, it’s one of the greatest challenges we will ever face.

Trump’s toxic brew of insult comedy, rank dishonesty, ethnic grievance, and hostility to basic principles of free enterprise, free speech, and limited government cannot be reconciled with the modern conservative movement. If Donald Trump is the answer, you have asked a very wrong and very stupid question.

Win or lose in the fall — although the odds clearly favor the “lose” scenario — a nominated Trump would obviously sit atop the Republican Party’s ticket in 2016. But he need not become its permanent national brand. Moreover, while the GOP has become the primary political vehicle for American conservatism, the movement is about far more than elections. It is about powerful ideas. It is about timeless principles. It is not the equivalent of an infomercial offering fake cures or a reality TV show offering fake freaks.

Here is my advice for North Carolina conservatives. When it comes to politics, focus your attention on campaigns that appeal to voters’ noblest aspirations, not their basest fears. Fight on, naturally, but if the presidential race this fall ends up pitting a dishonest, narcissistic conspiracy theorist who dreams of using federal power to silence dissent — I’m talking about Hillary Clinton here — against a Republican exhibiting the same ominous qualities, look elsewhere for candidates to champion. For example, look at governors, legislators, and other leaders who are solving real problems and building real, lasting political coalitions.

Outside of politics, focus your attention on education and outreach. Many Americans are susceptible to political con jobs because they lack a solid grounding in the principles of free enterprise and constitutional government. There is no substitute for hard, patient, and creative work to address this problem.

Many Trump supporters don’t know much about his actual positions or his shameful history. They are frustrated, understandably so, and looking for answers. We’ve all been there at some point in our lives. We’ve probably all been the victims of a con at least once. But other Trump supporters — a motley crew of simpletons, bigots and cynical manipulators — know exactly what kind of person he is. They don’t care. They want to make a statement. They want to tell off the “establishment.” They want to see things burn.

Conservatives have no choice but to hold these fools accountable for what is likely to come next. They deserve our scorn and ridicule. They would rather lose gloriously rather than win in stages. Some hold significant positions of influence. Conservatives should shun their shows, defund their groups, leave their books unsold and their speeches unattended.

I am a fundamentally optimistic person. That’s because I am a realist. If you survey human history, you will find many tales of tragedy, deceit, rancor, and woe. But on balance, things are getting better. Wars are less frequent. Hatreds and prejudices are less prevalent. Living standards are rising. The cornucopia of goods and services available to the average American today would simply amaze the wealthiest American from a century ago.

Realism teaches me not to bet against the future — particularly not here in North Carolina and the rest of our great country. We don’t have to settle for a choice between anemic, European-style social democracy and septic, European-style demagoguery. We can still fight for freedom, American-style. Will you join me?