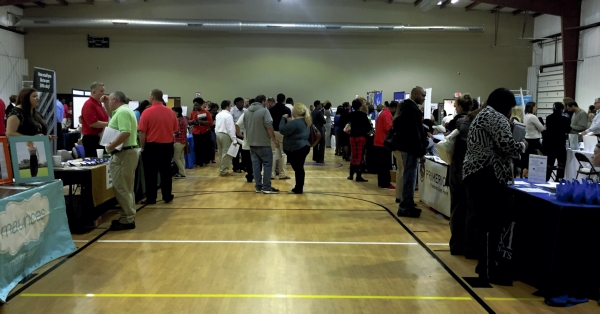 The Centralina Workforce Development Board, the NCWorks Career Center of Cabarrus County and Rowan-Cabarrus Community College came together to host a community job fair for job seekers, veterans and military families on Tuesday.

After telling the crowd a little bit about their companies, the panelists talked about what they looked for in potential employees and gave advice.

Royal said he looked for employees who understood the importance of taking care of customers and were team players.

Royal advised the job seekers to show employers how they add value to the company.

“If you’re unemployed, it’s easy to feel sorry for yourself or not feel like you have value. That’s a big mistake,” he said. “Anybody that has breath in them has value.”

Keziah said punctuality and communication is important for any job. He said job seekers should have an up-to-date resume that is tailored to the specific company. Keziah also said it is necessary to have a willingness to learn.

“You can get hired for one thing but something will come up and if you’re willing to take it on, you may open up an opportunity for yourself and not even realize it,” he said.

Peterson said his company looked for committed and dedicated employees who are looking for long-term employment.

“We’re not looking for someone who is just looking to jump from company to company. We want retainment, just like family. When you have family, family is forever,” he said. “We have that same mindset.”

Along with being persistent and standing out to employers, Peterson said job seekers can use the people around them to help them find a job.

“Utilize people that you know of. At Novant, we’re pretty much everywhere,” he said.

He also said job seekers can use websites like LinkedIn to their advantage.

After the panel discussion, job seekers moved into the gymnasium for the job fair.

More than 60 employers attended the event, and within the first hour there were almost 300 job seekers present, according to Denisha Torrence-Nesbit, a business services consultant with NCWorks Career Center in Cabarrus County.

Some companies that had tables set up at the fair were Novant Health, the City of Concord, Bayada Home Health Care, the City of Kannapolis, Corning Incorporated, Gordon Foods, Henkel, NCDPS Division of Adult Correction, Rowan-Salisbury Schools and Wells Fargo. There were also five helping agencies, like the NCWorks Career Center.

Torrence-Nesbit said there was a wide variety of employers at the fair.

“Anybody who’s looking for any type of work from an engineer down to a general laborer, I think they’ll be able to find it here,” Torrence-Nesbit said.

Employers came from Concord, Kannapolis and Salisbury, but also from Charlotte, Winston-Salem and the mountains.

There was also a variety of job seekers. Torrence-Nesbit said they ranged from RCCC graduates to those laid off from Freightliner’s truck manufacturing plant in Cleveland.

Melissa Rivers, from Kannapolis, said she was looking for a business operational position. She said other job fairs she has been to have focused on labor jobs, so she was glad to see this one was different.

“This was one of the better job fairs that I’ve been to,” she said. “There’s a mix of companies and it seems like the jobs that are available are kind of mixed.”

Ben Hurley, from Salisbury, said the fair was well organized and he felt that the employers were helpful.

“They’re giving us all the information they can give us,” he said.

Sarah Scott, from Landis, was looking for a job in retail or management. She said it was nice to see employers coming together to help the community.

“There’s so many people out of work and they’re actually acknowledging that right now,” she said.