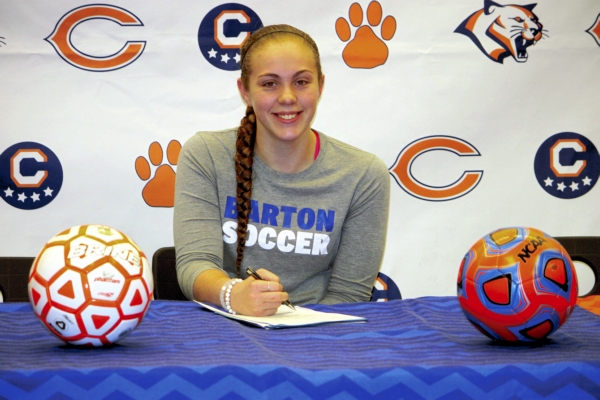 CHINA GROVE — Carson senior Megan Bolick was introduced to soccer at an age when most girls are being introduced to crayons, Play-Doh and five-piece puzzles.
While she still remembers getting started when she was just 3 years old, Bolick hasn’t burned out playing soccer year-round. She loves it a little more every day, and she’ll get to keep playing several more years. The 5-foot-9 goalkeeper signed recently with Barton.
Barton is a Division II college in Wilson, N.C. The Bulldogs compete in Conference Carolinas with schools such as Pfeiffer, Belmont Abbey, Limestone, Mount Olive and Lees-McRae.
Bolick has been a goalkeeper most of her life.
“I really liked soccer right away and I took to goalkeeping for some reason,” Bolick said. “My dad (David) was my first coach.”
She’s become proficient at stopping shots, both for Carson and for her Charlotte Soccer Academy team.
She earned a spot and competed in the high-profile Powerade State Games in the summer of 2014, following her sophomore year.
As a junior, Bolick made the All-South Piedmont Conference and All-Rowan County teams. She posted eight shutouts for the Cougars and had 124 saves — 7.3 per game.
She put up those numbers in her first year as Carson’s full-time keeper. Carson also had basketball star Alex Allen, a quality goalie who was a senior in 2015, but coach Lauren West decided to employ Allen in the field as a defender and to turn goalkeeping duties over to Bolick.
“Megan did a good job of taking the reins in the first year where it was all her,” Carson coach Lauren West said.
In Carson’s games against the SPC’s strongest team, Cox Mill, Bolick was peppered with shots. She made 39 saves in those two games.
“We were ahead of Cox Mill at halftime, 1-0, the first time we played them because Megan played such a great game,” Carson coach Lauren West said. “We lost 5-1, but she gave us a chance to compete with a strong team. She’s a good athlete and she comes up big against the toughest opponents.”
Bolick’s favorite memories from her junior season are from games Carson won. There were nine saves in a 1-0 win against West Rowan and eight saves in a 2-1 victory against South Rowan. Against Concord, she stopped a penalty kick, and the Cougars won 1-0.
“The West game is the one I remember best,” Bolick said. “We won on a goal in the last few minutes, and I had some good saves. People remember the diving saves, but sometimes just making that simple jump save can make the difference.”
Coach West says Bolick brings a lot to the table.
“She trains with a keeper coach, so she has excellent technique, and we’re blessed to have someone like that at Carson,” West said. “She’s instinctive. She’s very good at reading situations and making those instant decisions that make the difference between winning and losing.”
When a Barton coach saw Bolick play, those skills and instincts were on display. E-mails and a visit to the Barton campus followed.
“It’s the kind of school I was looking for,” Bolick said. “I wanted a small-school environment and the campus and the team felt like the right fit.”
While Carson (12-4 in the SPC in 2015) will make its season debut this week, Bolick, a captain, and fellow seniors Cynthia Romero and Cierra Josey have been preparing the Cougars for months.
“From November to February, you count on your seniors to be leaders and to run the workouts, and they’ve done a great job,” West said. “It’s hard to replace athletes like Cassie Howard and Sarah Safrit with young players, but we can be pretty good.”
•••
NOTES: West said Carson has enough players that it will have a jayvee team this year. … Safrit scored four goals this fall for Emory & Henry.