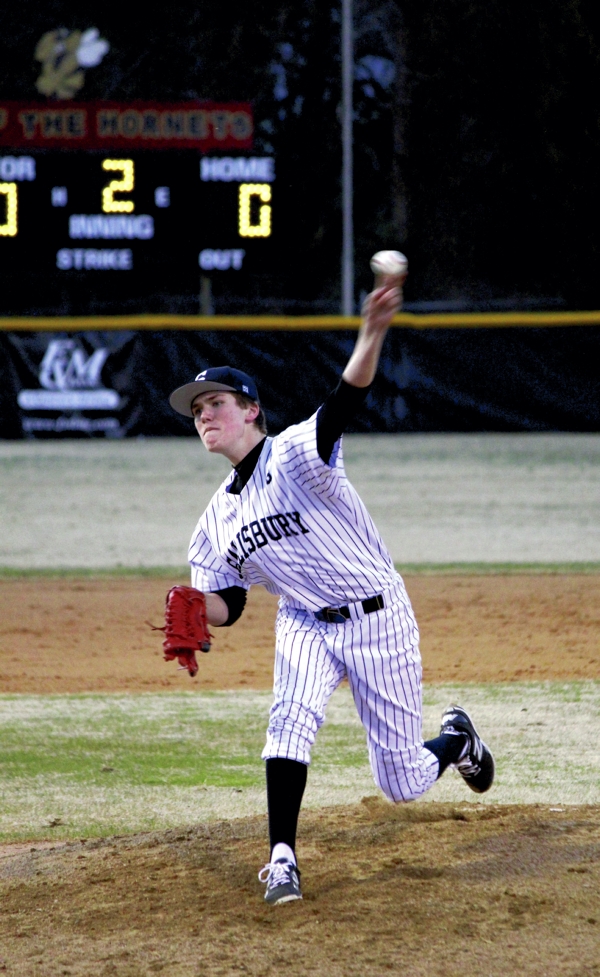 SALISBURY — What happened at Salisbury High’s Robertson Stadium on Monday was surprising only if you’re unfamiliar with the Greater Cabarrus Stallions.
The Stallions (6-0), who competed in the Homeschool World Series last season, have a lot of talent and a lot of experience and they won 13-4 to spoil the SHS debut of head coach Mike Herndon.
“We’ve got about everyone back from last year,” Stallions pitcher Sawyer Strickland said. “We’ve had the same group of guys together a long time, and we’re going to have a very good team.”
Strickland, who pitched six shutout innings, and Hunter Shepherd, who drove in three runs for the Stallions, will be playing for the Catawba Indians next season.
Strickland, Shepherd and a third Stallion, Noah Jarrett, were part of Rowan County’s state-championship American Legion team last summer.
Salisbury pitcher Jack Fisher, a freshman left-hander, stopped the Stallions for three innings, stranding a runner at third base in the first inning and escaping a bases-loaded jam in the third by getting Caleb Threadgill to hit a flyball.
“Jack was working his tail off, pitching his way out of some tough situations, and we were making the plays for him,” Herndon said.
But everything fell apart for the Hornets in the fourth inning after a potential double-play grounder was booted. The Stallions sent 12 men to the plate in the fourth against Fisher and reliever Griffin Myers and scored eight runs. Dalton Lankford began the big inning with a bunt single and he drilled a run-scoring double before it was over.
“If we get the double play there, it’s a different ballgame, but mistakes happen,” Herndon said. “All we can do is learn from it. We can’t sulk and let it blow up on us. When we make a mistake, that’s when we’ve got to pick each other up.”
Salisbury hitters usually made decent contact against Strickland, who breezed through six innings with just 68 pitches.
“I had good command and I was able to hit spots,” Strickland said. “They were hitting the ball, but there was some good defense behind me. I was able to keep my pitch count low.”
Strickland struck out three, walked none, and allowed three hits — singles by Chandler Lippard and John Yang and a double by Harrison Smith.
Lankford had four hits and A.J. Knight had three to lead a 16-hit attack by the Stallions. Shepherd had two run-scoring singles and drove in another run with a fielder’s choice.
“They can really swing it,” Herndon said.
The Stallions added a single run in the sixth, and then scored four times in the top of the seventh to take a 13-0 lead.
“We can get started a little earlier than the public schools, and I like where we are right now even though weather has kept us in the batting cages more than on the practice field,” Stallions coach Chris Lankford said. “We know we’ve got some things to clean up in the field, but I was happy with our hitting and Sawyer threw well.”
The Stallions held up a few more runners who might have advanced another base, trying to be courteous in a blowout game, but Herndon told the Stallions not to hold back.
“If they’re holding guys up, they’re not helping us or themselves,” Herndon said. “One thing we’re never going to do here is wave a white flag.”
Salisbury showed that in the bottom of the seventh by scoring four runs against reliever Cameron Wallace. Alex Yang, Joe Steinman and Will Steinman had hits, and freshman Bo Rusher whacked a two-run single up the middle.
“We could’ve just lost 13-0 and gone home, but we showed some fight,” Herndon said.
•••
NOTES: Salisbury second baseman Joe Steinman caught a line drive in the seventh and turned it into a double play. … Shepherd has been limited to swinging a bat so far, but Coach Lankford expects him to be back on the mound in a matter of weeks. … The Stallions are tackling a 40-game schedule, mostly against public schools. They play East Montgomery next, and they will also be returning to the Easter Tournament at Staton Field.
R H E
Greater Cabarrus Stallions 000 801 4 — 13 16 5
Salisbury 000 000 4 — 4 6 3
W — Strickland (2-0). L — Fisher (0-1).