Chris Rock skewers everyone at Oscars 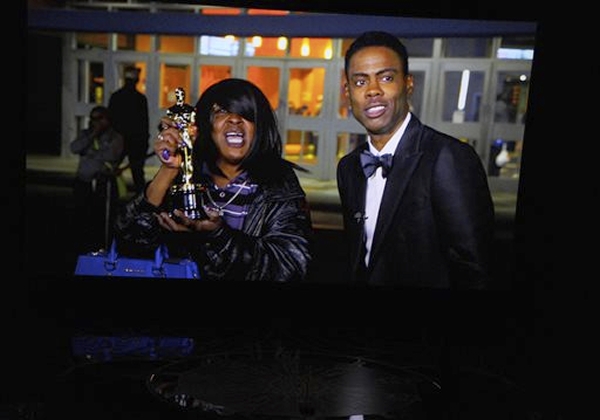 Host Chris Rock, right, appears on screen as he interviews an unidentified moviegoer off-site during the Oscars on Sunday, Feb. 28, 2016, at the Dolby Theatre in Los Angeles. AP photo

From a column by Carla Hall in the Los Angeles Times:

Well, we knew that Chris Rock would take on Hollywood and the #OscarsSoWhite meme and the fact that no person of color was nominated in any of the four Academy Awards acting categories. We wanted him to take all that on. No one really wanted an un-diverse Oscar nominee slate, but having that happen the same year that the academy had picked one of the funniest and most bitingly honest comics on the issue of race to host the show was almost too delicious to be true.

But who expected he would take on both sides? He mocked the people who chose to protest this year — noting that if this is the 88th Oscars ceremony, surely in, at least, seven decades there were no black nominees. Or as he put it, “one of those years that Sidney didn’t put out a movie.” (That would be Sidney Poitier.)

And while he had a captive audience, he went on: “It’s not about boycotting anything. We want opportunity. We want black actors to get the same opportunities. And that’s it. Not just once. Leo gets a great part every year … but what about the black actors?”