Barbecue gets the treatment in new cookbook 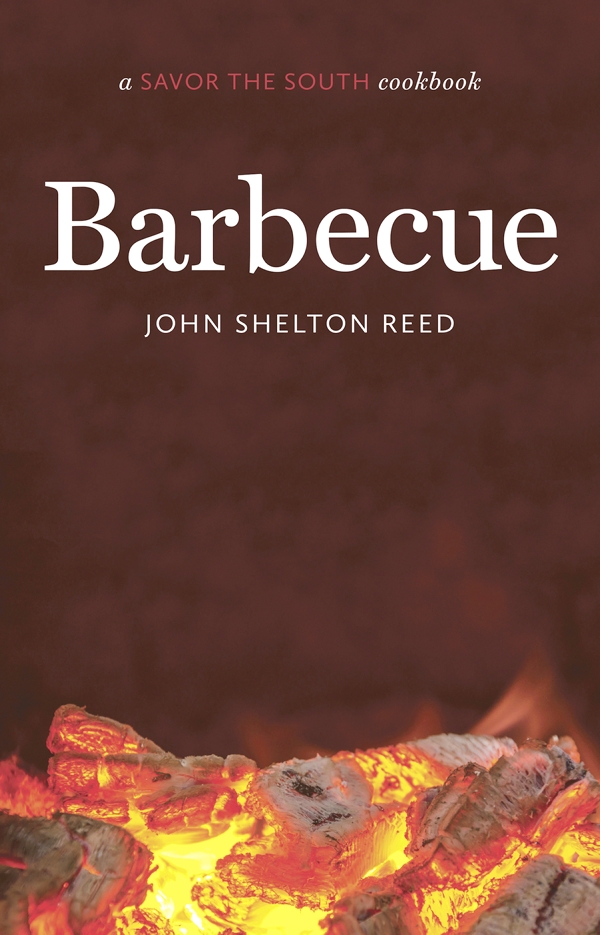 'Barbecue' by John Shelton Reed is the latest in the Savor the South series by University of North Carolina Press.

Barbecue, according to John Shelton Reed: “That means meat cooked for a long time at a low temperature with heat and smoke from burning wood or wood coals.”

It does not mean hot dogs on a gas cooker. So there. Leave it to Reed to lay it on the line and tell us what is and what is not barbecue. As usual, he’s pretty direct.

Barbcues probably came from the West Indies, and were an arrangement on which fish and small game were cooked.

The Spanish called it a barbacoa, which is where we get barbecue today — so it is acceptable to throw something on the barbecue.

The concept migrated to the Eastern Seaboard with the colonists, Reed tells us, and barbecue days became big feasts of celebration, with people from every class — but the lower classes had to do all the heavy lifting. There were card games and dice and plenty of drink.

That same colonial era brought the flavors of lime and pepper from the Caribbean to flavor the meat, which evolved to vinegar — much easier to find than limes —and pepper. For most of America’s history, barbecue was pretty much the same wherever it was eaten, says Reed.

Then the sides came into question, from cole slaw to breads to stews.

And then, Reed writes, in the Centennial Expo of 1876, bottled ketchup was introduced, and it, like kudzu (introduced at the same expo) took over the South.

Reed says pork is the only meat for barbecue in eastern North and South Carolina, still with an emphasis on the whole hog cooked for a long time in a vinegar and pepper sauce.

Who knew Germans played such a large role in what we now call barbecue? Reed say that by adding ketchup to the sauce, the dish becomes very similar to a German one. Same goes for that weird yellow-mustard sauce in part of South Carolina — both Piedmonts were settled by Germans.

And they headed into Kentucky, where around Owesnboro, mutton is the only proper barbecue.

Barbecue owes much to the African Americans who cooked the whole hogs for the big house. The enslaved people took the shoulder (called butt) and ribs and that became the preferred cut.

Memphis became a barbecue mecca, with a lot of different styles of cooking  and cuts and sauces. And Kansas City owes its barbecue heritage to Memphis, as well.

Reed makes a great analogy about barbecue men (nearly always men, he says). They are “like Orthodox icon painters.” Some have done it more, and some were better, but they were all following the same pattern or tradition.

Reed also sets out to tell us what he’s not going to cover. First of all, real barbecue is not something many home cooks can do. Few have the correct setup. Forget a whole hog. That’s for the professionals.

If you want to attempt to cook barbecue at home, you must use indirect heat — no meat directly over the hot coals.

And you must have certain tools, which Reed lists in his introduction. You cannot expect precision, especially in temperatures, as if it were cooked in an oven.

So, what Reed is trying to say is this: This ain’t for sissies. Real barbecue takes experience and commitment. Don’t mess around.

After his warnings, admonitions and tips, Reed does include recipes. You know what barbecue pizza is? A pizza shell with pulled pork and barbecue sauce on it. Elvis loved it.

In the mood for a St. Louis Hog Snoot? Look no futher.

The real meat of the book is in the rubs, sauces, mops and dips, which range from the sweet Memphis flavors to the vinegary North Carolina flavors to the odd North Alabama White Sauce.

He gives a nod to bread and even stoops low enough to find the traditional desserts (who has room for dessert?).  Dori Sanders Peach Cobbler is in here, and the original recipe for Nilla Wafer Banana Pudding.

To drink? Well, beer is nice. But Sweet Tea, the “house wine of the South” is just the ticket.

With the seasons changing, it won’t be long before barbecues will start heating up back yards. Just be careful about what you call it.