The Dart: When the body betrays the fisherman’s heart 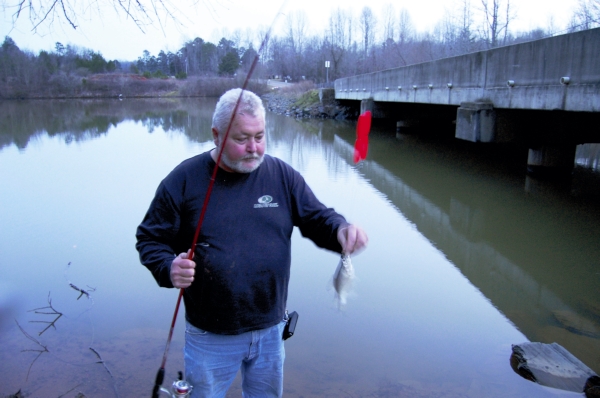 Amanda Raymond/Salisbury Post Guy "Tony" Benfield likes to go out to High Rock Lake to fish as much as he can using his own customized floats.

He was crappie fishing on the bank of High Rock Lake with his fishing line cast out under a bridge. His cooler was filled with minnows, and three other fishing rods were in the red mud close by.

Benfield doesn’t fish as often as he used to. He used to be able to walk up and down the bank for hours. He and his fishing buddies used to take fishing trips that lasted 17 hours. Now he has grown older and has some health issues, but he comes out every once and a while to do something he has loved since he was a child.

“I’m on disability so when I can get up and get out a little bit, I like to do it,” he said.

Benfield likes to work with his hands. In 2002, he and a friend started customizing slip floats so that they could throw the line out further and go out and retrieve the floats if they broke off.

“I’ve been down here many a time and people couldn’t get out there like me. They weren’t catching nothing,” he said.

Benfield said eventually, he started seeing the customized floats with random people who didn’t know he and his friend came up with the idea.

“I probably ought to get a patent on it,” he said. “I probably should have done that a long time ago.”

Benfield has updated and improved on his design over the years. While fishing one day, he noticed a couple having a little trouble catching fish.

The next week, Benfield went fishing with his girlfriend and her children and he came across the same couple. This time Benfield and the couple switched spots, but it still ended up being Benfield catching all the fish.

It wasn’t just his custom float –  Benfield has been fishing since he was 2 years old.

That love for fishing has just stayed with him over the years. The first thing Benfield’s sisters did when he got out of the hospital was take him fishing.

While living in Virginia, Benfield met a girl. She came from a rough background and left her husband back in Georgia. She told him that she had met someone else and was not going back to him. He showed up at Benfield’s house and threatened him. But Benfield stood his ground and the man left. He later came back and shot Benfield eight times. He also shot one of Benfield’s friends.

“I know what it’s like to lay there on the ground and make peace with the man upstairs,” he said.

After recovering, Benfield tried to go back and work, but he couldn’t do it.

So he keeps himself busy with other things. Along with fishing and working on his floats, which all have names, he fixes rods and is learning to make wrapping jigs.

He also paints wildlife and forest scenes from memory on old hand saws.

Benfield said if he could, he would fish year round. But he can’t move around like he used to and can’t take the cold weather like he could in his younger days. He has diabetes now, and is losing function in his hands.

“I’m starting to believe maybe things aren’t cut out for me in this world. I don’t know,” he said.

But he will keep fishing for as long as he can.