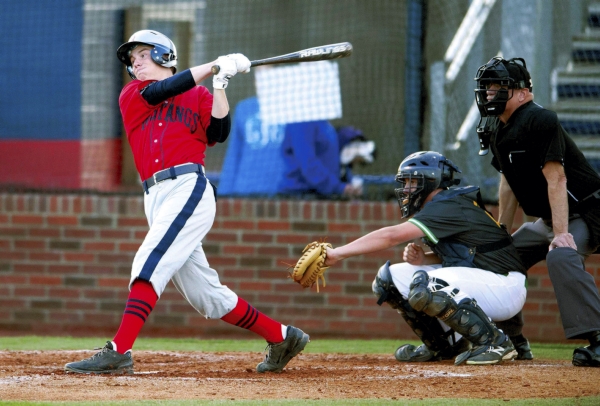 GRANITE QUARRY — Do the math on East Rowan baseball during coach Brian Hightower’s 11 seasons and you’ll find that the Mustangs have averaged 20 wins and 8.5 losses during his tenure.
That’s really strong, but those numbers figure to drop. If they don’t drop in 2016, Hightower should be voted coach of the year for the universe.
East’s 2015 lineup had only a few less holes than McCanless Golf Club, but Hightower managed a 15-11 record and a 10-6 mark in the 3A South Piedmont Conference.
As another season begins, he faces even tougher challenges. Graduation erased the pitching staff. The five Mustangs who did the hurling in 2015 — draft pick Joseph Peeler, Tyler Scruggs, Logan Towne, Alec Hamilton and Harrison Bell — were seniors. It was a dependable staff — a cumulative 2.65 ERA — and those pitchers were the biggest reason East won 15 times.
“We’ve got zero varsity pitching innings back,” Hightower said. “John Owen pitched two innings when he was a freshman in 2014. That’s our total varsity experience on the mound.”
If East is going to win its share of games, two things have to happen. The offense, which is minus the Wyrick twins, East’s second and third-best hitters a year ago, has to produce more, and new pitchers have to grow up quickly.
East won’t go into the season without studs. Senior shortstop Ike Freeman (.372, 10 doubles, 21 RBIs) could be the county’s best hitter.
Owen (.284, 12 RBIs) was good in American Legion ball last summer and having him is almost like having four guys. He’ll be the No. 1 pitcher. He’ll also be used at catcher, first base or second base when someone else pitches.
Jackson Justus (.262, 15 RBIs) returns as a solid starter at third base.
East’s pitchers behind Owen will be sophomore Hayden Setzer (that’s Catawba right fielder Luke’s little brother), senior Jordan Wise, junior Nathan Hill and sophomore Will Brown.
Chandler Blackwelder, a junior who didn’t play last season, will be the center fielder.
“He can hit,” Hightower said. “He’s been a big help to us.”
Sophomore Trevor Scruggs will catch when Owen pitches.
Hightower hopes either Wise or Brown will take charge in right field and that Daniel Gonzalez or soph Chandler Antoseck will break through in left field. Either Hill or Setzer will play first base. Tanner File gets the first shot at second base, with Colby Myrick in reserve.
East, which used to have a small army in the dugout, now has a 13-man roster, so it’s not like Hightower has unlimited options.
On the bright side, the coach will have less travel. He’s finally sold his house in Statesville and is moving to Rowan County.
East opens South Piedmont Conference play on Wednesday at Staton Field against Cox Mill, the first of 18 league games for the Mustangs.
“I don’t think our league will have a bad team,” Hightower said. “Hopefully, we can beat some people.”
SPC teams won’t be playing each other back-to-back in the same week this time. That means East might see an ace hurler such as Carson’s Owen White twice instead of once.