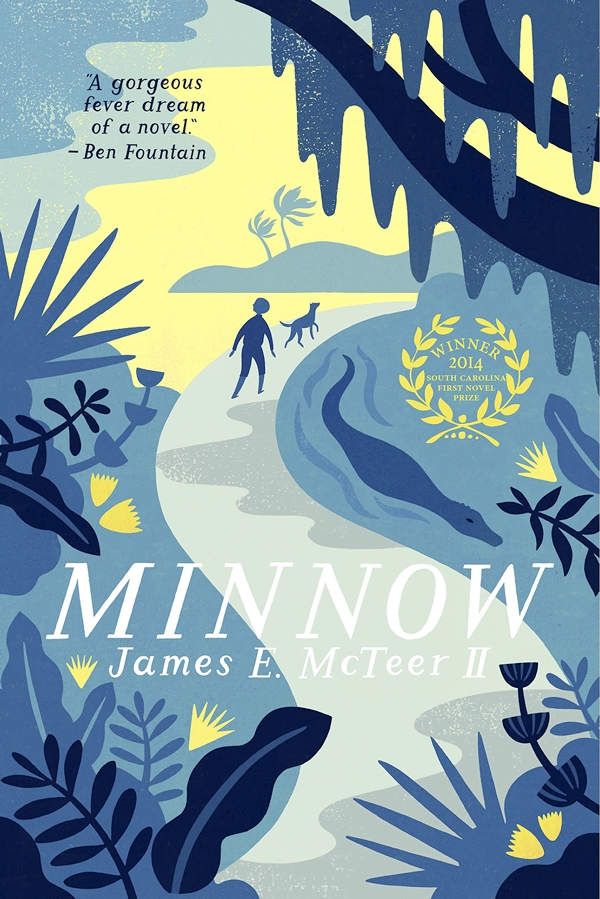 One feature Rowan Reading Rendezvous readers have come to expect is the chance to meet new young writers and older writers just entering the craft. That remains the same with RRR 2016, where four writers make up the New Fiction and Debut Novelists Roundtable.

This panel runs from 1:20-2 p.m. All guest authors for this are, for the first time ever, men; all have first novels out, and only one has published before.

James E. McTeer II is from Beaufort, S.C., and is a school librarian in Columbia, S.C. His grandfather was high sheriff of the Lowcountry for 37 years and, incidentally, a witch doctor. It is with these roots that McTeer has written “Minnow,” published last May by Hub City Press.

Seeking a medicine to save his dying father, a boy sets off on a mysterious journey in search of the grave dust of a long-dead hoodoo man. “Minnow” is a Lowcountry “Heart of Darkness” about the mysteries of childhood, the sacrifices we make to preserve our families, and the ghosts that linger in the Spanish moss of the South Carolina barrier islands.

Kirkus Review gave the book a starred review, saying, “An evocative novel that brings to life an intensely realized portrait of the South Carolina Lowcountry and sends its appealing young hero on a journey full of the strangeness of childhood and the difficult choices that come with growing up.” Kirkus also named “Minnow” one of the best novels of 2015.

Library Journal, also in a starred review, wrote: “Readers will sink into this novel like sinking into South Carolina pluff mud, feeling the tension like oppressive humidity, and wondering what obstacle the protagonist will face next and what sacrifices he will endure for his family. A compellingly dark debut full of Southern mystery and lore.” Publishers Weekly also gave a favorable review, and the novel won the South Carolina First Fiction Prize in 2014.

Greg Shemkovitz, who is no stranger to Salisbury, comes back seeking a little more attention for his July 2015 debut novel “Lot Boy.” Shemkovitz teaches writing and literature at Elon University after growing up in Buffalo, N.Y., where his novel is set. His shorter fiction has appeared in a number of literary journals and magazines.

“Lot Boy” tells of a young man who has grown up with the run of his father’s auto dealership in Buffalo, a business he stands to inherit. But this young man, Eddie Lanning, has no ambition beyond doing the most menial tasks around the dealership, being a “lot boy” in other words, until he graduates into petty, then not so petty, criminal actions with the intention of finally leaving the land of snow with his former high school girlfriend.

Eddie has plenty of help in his nefarious adventures from the mechanics and hangers-on at the dealership, so he need not travel down the stray road alone. Eddie’s father, taking ill, puts the boy in a position of having to make a choice he may not be prepared for.

“Lot Boy” has a good share of reviews from the smaller and independent review industry. The MonkeyBicycle review sums it up. “… Any reader can appreciate the struggle against apathy, the limitations of a small town, and familial expectations. One starts the book with interest in Eddie’s crime, but ends up turning the pages for the relationships. Vulgar and harsh as the novel often is, Eddie’s independence from and dependence on his dealership family are the heart of the story.”

Forward Reviews says, “ ‘Lot Boy’ is an inventive, unsparing take on a mind-set so wrapped in real and imagined losses that it can’t make room for others. Shemkovitz inhabits his main character by way of a thorough, crisp approach, offering a window on stagnation in an American city.”

Third on the roundtable dais is Travis Mulhauser, a Petoskey, Mich., transplant who received his MFA from UNCG and now calls Durham home. His novel “Sweetgirl” is his first, though it was preceded in 2005 by “Greetings from Cutler County,” a collection of stories and a novella.

“Sweetgirl” is one of the few books from this year’s authors that I have read, and I found it to be one fantastic novel. Set in the upper Midwest, this story is of a 16-year-old girl in search of her missing mother who faces unexpected challenges and hazards in her pursuit. Reviews have compared it to “True Grit” and “Winter’s Bone,” but I found myself thinking of the works of Bonnie Jo Campbell, especially “Once Upon a River.”

“Sweetgirl” was picked by Ploughshares as a Best Book of the New Year, and, though out only several weeks, is ranked number nine on the Great Lakes Independent Bookseller’s Association bestseller list and debuted at number 12 on the Midwest Indie List. Dannye Romine Powell, of the Charlotte Observer, said, “This debut novel is chillingly lyrical and filled with a love so raw and fierce it takes your breath.”

“Sweetgirl” received blurbs from Ron Rash, Brock Clarke and Michael Parker, who was a guest author at RRR 2015. Parker said, “This novel comes on like the blizzard at its center, and leaves you dazzled and dazed not only by how much Travis Mulhauser knows, but how deeply he cares.”

NPR, in its stellar review, concluded: “Mixing humor and tragedy is always a difficult balancing act, particularly in a novel dealing with drug addiction, broken families and violence, and the fact that Mulhauser pulls it off so brilliantly in a debut novel is something like a miracle. ‘Sweetgirl’ is hilarious, heartbreaking and true, a major accomplishment from an author who looks certain to have an impressive career ahead of him.”

The final chair on the stage will be filled by Ross Howell Jr., born in West Virginia, moved all over the country and finally raised in Floyd County, Va., now living in Greensboro; he teaches at Elon University. He received his education at University of Virginia, Harvard, and the Iowa Writer’s Workshop before pursuing a career in fundraising, marketing and book publishing.

Howell did not let that MFA from Iowa go to waste, publishing short fiction in a number of literary journals and magazines, but his novel “Forsaken,” published just this month, is his first book. Howell says, “… I should be old enough to know better,” but I think once you have met the author and read the book, you will beg to disagree with him.

“Forsaken” is based on a true story, the 1912 murder trial of Virginia Christian in Hampton, Va. The African American child was found guilty of murdering her 51-year-old employer and executed in the electric chair at the age of 17. Many of the characters are true historical figures, including Christian herself, her attorney George Washington Fields, a former slave who graduated from Cornell and continued to practice law even though blind, and Gov. William Hodges Mann, who denied Christian clemency.

The narrator, the journalist Charles Mears, is more of a fabrication, and yet he, as much as Virginia Christian, is who the novel is about, and it is Mears who drives the story. Howell did a tremendous amount of research in order to write “Forsaken,” and he has taken that raw information and transformed it into a novel of the times then and sadly, in some respects, our times today.

It is obvious from the beginning that Howell’s interest in his subject neither began nor will end with his novel. In an interview with Shelf Awareness, Howell says, “Virgie Christian’s life and death were shaped by the distrust and hate of one race for another. I saw that distrust and hate as a young man. And now, a full century after her death, I see hate and distrust growing.” Howell concludes, “I hope readers take away from this novel empathy, hope and the resolve to honor human dignity.”