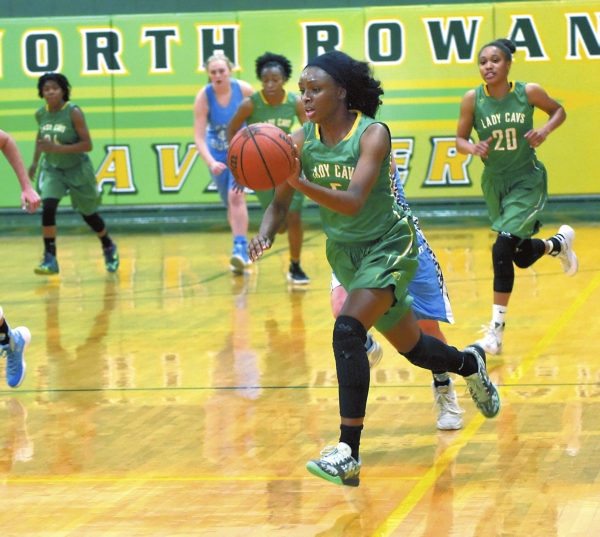 SPENCER — Despite playing on back to back nights in locations 200 miles apart, the East Burke Cavaliers were still enough of a well-oiled machine to end North Rowan’s girls basketball season, 51-41, here Saturday night.

The inside power of Kieran Smith (19 points, 11, rebounds) and the outside accuracy of Savannah Coble (four 3-pointers) gave East Burke (22-9) all the spark they needed to win the third round state 2A West battle and move on to the regional semifinals. For the North girls (19-8), it was simply a night of missed opportunities as numerous layups and put-backs just would not fall.

“We have just got to make shots,” North coach Brian Lytton repeated over and over afterwards. “That was the biggest difference tonight. We didn’t make shots and they did.”

The frustration for North was best exemplified by a disastrous third period as the team managed just five points and saw a three-point deficit expand to 10. The Cavs missed four layups, three put-backs and a jumper in four trips midway in the third as East Burke pulled out to a 36-26 lead.

North closed to within six points in the final period on a Special Washington three-pointer but East Burke ran the clock down efficiently and connected on four of five free throws in the final minute to seal the win.

“We are lucky enough to have a lot of depth,” winning coach Crystal Bartlett said after her team won at Mountain Heritage in Burnsville Friday night, then at North last night. “Every girl on our team can play, which gives us a deep bench. I am just proud of my young team (one senior) and am a little surprised we have made it this deep in the playoffs but we will take it.”

East Burke came out red-hot to start the game as they feed the ball down low to 6-0 post player Smith to build a 17-7 lead. North Rowan turned up the defensive pressure in a strong second quarter to get back in the game as they notched seven steals and twice cut the deficit to one point in the final minute of the first half. Senior guard Aliyah Farmer keyed the surge with five steals and two blocked shots, the last one on a spectacular rejection of a Coble 3-pointer that she took the other way for a layup.

“They (North) were very athletic and so quick”, East Burke’s Bartlett noted, “We just had to read the press and make the right passes to counter their pressure.”

East Burke had the North defensive pressure figured out in the third period as Coble hit three long bombs to give her 16 for the night while Smith converted three more buckets down low.

A tearful Farmer said after the game that the missed shots hurt the team. “We just missed a lot of easy shots, a lot of lay-ups,” Farmer said. “Plus we did not play good defense as a team most of the game.”

As a sad irony of the game, Farmer came into the contest needing 19 points to give her 1000 for her varsity career. She drained a long 3-pointer right before the final horn in the game but that just gave her 13, and a career total of 994 points. But the 5-9 Farmer went out with a bang as she recorded a double-double of 13 points, 13 rebounds to go with six steals and three blocked shots. Washington, another senior, led the Cavaliers’ effort with 15 points.

The third-round match-up was not an expected one as East Burke came in as the 13th seed and North as the 12th. But both went on the road in the second round to knock off a pair of top 5 seeds. East Burke will now advance to the regional semi-final on Tuesday night at top seed East Davidson (28-1), the champions of the Central Carolina Conference.