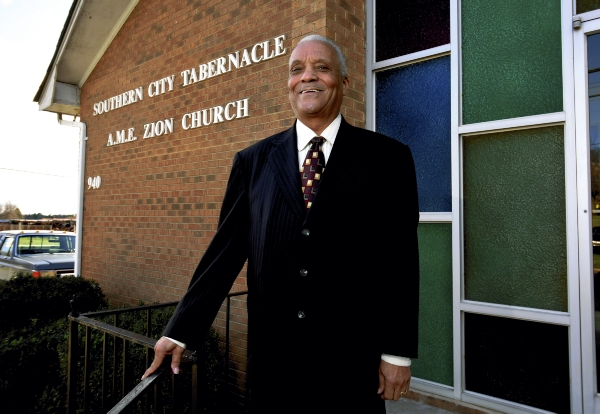 JON C. LAKEY / SALISBURY POST Reginald Massey poses for a photo at Southern City Tabernacle AME Zion church in East Spencer where he served as a pastoral internship for three years. Massey is the 2016 recipient of the Legacy of a Leader award. He was the first African-American mayor of East Spencer, elected to the board in 1973 during a time when segregation and integration was being discussed locally.

EAST SPENCER — Early in his political career, Reginald Massey found himself in the middle of controversial issues facing the town of East Spencer board. He entered into the political arena at a time when blacks weren’t represented on the board and with a goal to see change.

In 1973, Massey became the first African-American mayor elected to the town of East Spencer, which also made him the first black mayor in Rowan County. The then 26-year-old car salesman had never before held a political office prior to becoming mayor.

Massey, an East Spencer native, is being named the 2016 recipient of the Legacy of a Leader award from Southern City African Methodist Episcopal Church. The retired minister was at one time an assistant pastor at the church. He still attends the East Spencer church.

He’ll be honored during the Legacy of a Leader program held at 3 p.m. today at Southern City Tabernacle, 940 S. Long St.

Before Massey became mayor, the board positions and many town departments, including fire and police, were all held by whites. Massey was voted into office just eight years after President Lyndon signed the Voting Rights Act into law.

He said it was a difficult time and a struggle to get work done with a board that was divided and serving in a town where blacks didn’t hold any positions.

When Massey became mayor it ushered in an opportunity for other African-Americans to hold positions on the board and in the town. Eventually, John L. Rustin Sr., also became the town’s first black police chief.

The town board became divided down the middle with three white people and three black people serving.

“My purpose for running in the first place was I truly wanted to break down the bonds of the institutionalized racism going on in my town. I wanted things to be done equally and fair,” Massey said.

Massey found himself the tiebreaker for a lot of issues and trying to figure out what he’d do when the white members and the black members refused to show up to board meetings. He said because some members didn’t show up for a meeting it made it difficult to vote on the issues.

“I did not realize at the time how difficult it would be, but I struggled through it,” he said.

Although his position as mayor did pave the way for other blacks to hold positions, it didn’t come without issues. He said many white people in the community left, including members of the fire department.

Massey said he was told if he became mayor, the fire department staff would quit.

“I said if that was what they wanted,  so be it — we were going to integrate,” Massey said.

He said he never imagined the white residents of East Spencer would leave.

“It was a rough struggle. It did change,” he said.

The whole fire department quit, but eventually there was some conversation that went on and they came back.

“We began to integrate the town,” Massey said.

Another first for Massey was being named the first black chaplain ever selected as chief of the Hefner VA Medical Center.

“He’s a great legacy in East Spencer. He’s been a leader all his life,” Kennedy said.

Kennedy, also a native of East Spencer, just like Massey received the Legacy of a Leader award.

“During that time there was separation in East Spencer. He was able to transcend that in talking with the entire city. He was elected not just by the minorities, but the entire city,” Kennedy said.

Current East Spencer Mayor Barbara Mallett is a part of the committee that chose this year’s award recipient.

“I remember with gratitude how he led East Spencer in the past. He guided us through a turbulent time with mercy and protection,” Mallett said.

When Massey was mayor, Mallett served as town clerk.

“We stand on the shoulders of giants. We celebrate him and this heritage he’s left us in the political arena. We want to celebrate him while he is here,” Mallett said.

Money raised during the Legacy of a Leader program will be used for a church scholarship fund established to benefit students at the church.