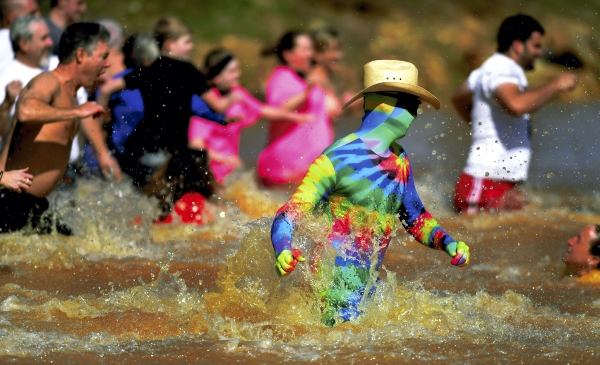 HIGH ROCK LAKE — Joshua Moss wanted to propose at a place where Sadie Hoffard would least expect it.

So after the couple raced into High Rock Lake as part of Saturday’s Polar Plunge for Special Olympics and hurried back to the shore wet, cold and sufficiently goose-bumped, Joshua retrieved a ring from young Roman Hoffard and asked Sadie for her hand in marriage.

“I’ve been planning it for a couple of weeks,” Joshua said later.

Sadie said yes, emphatically, and word spread quickly through the crowd that down near the shoreline under some trees, a couple had just taken the plunge in more ways than one.

“We had already talked of not joking around about that,” she said.

So this year’s Polar Plunge was a day when you might see anything, such as a polar bear, a woman on a horse and “Rainbow Man” dancing together. Or there was that whole army of “minions,” big and small, buzzing around before taking the plunge.

When the time came for the mass entry into High Rock Lake, which was a chilly 46 degrees, you saw men, women and children in costumes; macho men and boys with bare chests; whole teams dressed alike; and even girls in tutus.

More than 60 people entered the water Saturday. Most went in at least chest deep before turning around and hurrying toward their towels back on shore.

It was Eubanks’ third Polar Plunge, so she knew the best strategy, which she said was “get to the front of the line, get in, get out.”

The women took a direct line to a man in a red wetsuit, which was as far as Polar Plungers could go. They then turned around quickly and churned their legs toward the beach.

“Our students are here, and we want to support them,”  McConnell said. “They are as much a part of our college as anyone else.”

Rowan-Cabarrus Community College’s SOAR program is designed for adults with intellectual disabilities, and many of those students compete or have competed in Special Olympics.

Jay D. Taylor, lead instructor for the SOAR program on RCCC’s North campus, organizes and promotes the event each year. The Salisbury Elks River Park at the end of Long Ferry Rod serves as the venue.

“We hope this gets bigger each year,” Taylor said.

When the event started three years ago, it raised $2,100 for Special Olympics and had 16 people who went into the winter water.

Last year, there were 50 participants and $6,000 raised. This year’s event looks to have exceeded both those numbers. “Plungers” had to donate a minimum of $25 to go into the water.

Last year, the water temperature was 42 years, so the 46 degrees Saturday was an improvement.

“We were joking that it’s a little more balmy this year,” Taylor said.

The outside temperature lakeside was about 52 degrees. The event includes door prizes, a costume show, hot dog lunches and plenty of music, which seems to spark spontaneous dancing throughout the grounds.

“The idea is to make it fun,” Taylor said. His daughter, Joey Taylor, a middle-schooler in Mooresville, made her second Polar Plunge Saturday.

“Be prepared to be cold,” was Joey’s advice.

Jay Taylor couldn’t say enough kind words about the Elks and their standing invitation to have the event at their river park every year. Other organizations heavily involved are the Hurley YMCA in Salisbury and the community college.

Toni Deal, leading knight at the Salisbury Elks Lodge, said this is the second year for the Elks to host the event.

The lodge had its drug awareness trailer on site, and a boisterous team of Elks Lodge members who went into the water. “We’re definitely a community-focused organization,” Deal said.

Karen South Jones jumped into her C-horse costume — the “C” standing for her favorite civic club, the Civitans — and had fun dancing and mingling through the crowd before the plunge took place. She pulled herself out of her horse costume, by the way, before going into the water herself.

“I’m nervous, but excited,” Alicia Ketchie said before her first plunge, and that’s the general feeling of most participants, whether they are plunge veterans or not.

Jacob Biedrzycki, 13, did a Jan. 1 Polar Plunge at Lake Norman, so he had experience heading into Saturday’s plunge.

“He always loved jumping in the water,” his mother, Gretchen, said. “He’s quite a cold-water person.”

No matter what you might tell yourself, however, it’s a shock to the system getting into High Rock Lake at the end of February.

“It’s so cold,” Connie Julian said. “It’s the coldest I’ve ever been in my life.”