The Factory Metal Works to hold grand opening on March 12 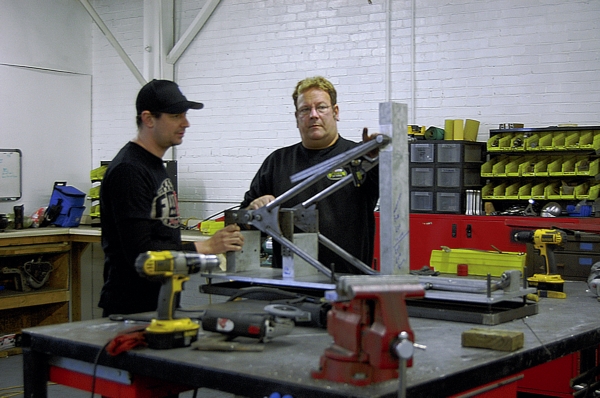 After Lucas Joyner got hurt riding a dirt bike, he decided he wanted to build something different than what he had before.

“My dad used to ride Triumphs back in the ’70s, so I decided to build a Triumph,” he said.

According to background information sent by his wife Stacy, Lucas Joyner’s passion for Triumphs began in childhood while listening to his father tell stories of his time racing Triumphs.

Now, one sits in the window of his new storefront, and the business that started in a garage is now in 10,000 square feet of space.

Joyner has been operating the business since 2009. He said he outgrew his previous location in Concord. Joyner said he likes the new space in Salisbury because it is centrally located in regards to Concord, Greensboro and Winston-Salem. The location also has a good amount of space and high visibility from the street.

The Factory Metal Works specializes in custom builds, custom parts and accessories. There is showroom space and a full service shop for motorcycles that will include basic maintenance, engine work, powder coating services and welding. The store also sells apparel.

Joyner said he will offer fabrication work to customers for more than just motorcycles.

The business’s online sales have brought about $6,000 a year, Joyner said. Products offered online include parts, frames and apparel.

The store will be an official Mooneyes store, one of only two Mooneyes stores in the country and the only one on the east coast. The other store is in California and the company’s hub is in Japan. According to its website, Mooneyes is known for supplying different parts and accessories for hot rods, rat rods and custom creations, as well as selling other products like clothing and collectibles. It also has an expanding line of motorcycle parts.

“Mooneyes is a very prestigious brand from the 1950s and ’60s, so unless you go to California or Japan, you don’t get to visit their stores,” he said.

Joyner said the store can be the kind of place where wives can shop for their husbands.

“I’m trying to have a place where women can come and say, ‘There’s some cool stuff here and I’ll buy something for him,’” he said.

People are already excited about the store. Joyner said people have stopped by because of the 1952 Triumph 650 motorcycle sitting in the front window.

The open house on March 12 will include food and giveaways.

Ultimately, Joyner said he wants the business to be more than just a store.

“We want to make it a destination more than a shop,” he said.