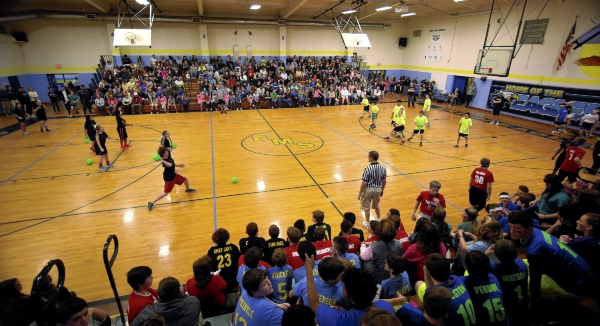 GRANITE QUARRY — The gym at Erwin Middle is full of the squeak of sneakers, the cheers of the crowd and the referee’s whistle. Highlighter-green dodgeballs fly on the court, and a section of the crowd ducks as one misses its mark.

Friday was the tenth anniversary of the “Big Dodge,” a yearly dodgeball tournament the school hosts to raise money for Relay for Life. This year, Assistant Principal Jessica Allen estimates the event raised nearly $3,500.

The double-elimination tournament is the project of the student council, and has been a hit since its first year in 2007.

This year, student body President Jentry Lambert said that the student council posted QR codes around the school, allowing students to scan it with their smartphones or tablets to view tournament rules and registration information.

But this year has been something special.

“This year, the amount of participation and excitement is the highest it’s been since the first year,” Allen said.

Allen said that spirits have been running high all week, peaking during an assembly Friday morning where the faculty team had a mock run. Nearly 400 students participated on 48 teams.

Students form eight-person teams, and each person pays a $10 registration fee. Part of that cost goes to providing the teams with individualized shirts. They pick a color, come up with a team name, and design their uniform.

The team Dodge On ‘Em, made up of sported white tutus, headbands and teal and white body paint.

The eight eighth-grade girls lost their first game, which put them on the losers bracket, where they’d have another chance to fight it out on the court. But team member Alexis Smith said they weren’t really expecting to win – they’re shooting for the event’s “best dressed” prize.

Allen says the event allows everyone to participate – even if a student isn’t normally athletic.

Eighth-grade student Aaron Vanderberg said that this is the first year he’s played. He was interested in playing his first two years at Erwin, but never found a team he felt comfortable with. This year, he and fellow baseball players formed the team “OVO,” which won its first two games. But Vanderberg says the Big Dodge is about more than just a team.

“It’s fun,” he said. “It’s this thing we do as a school and work together as friends.”

Teams can be comprised of all genders and grades, Allen said, something that usually never occurs within the school.

“This is a unique event,” she said.

This year, the school raised nearly $2,000 from student registration alone, and the rest from ticket sales. Lines of parents and family members come to cheer for their team stretched down the hallway as they waited to pay the $5 entry fee. To Allen, that’s another highlight of the day.

“This brings in parents that might not come to another sporting event,” she said.

After costs for the tournament were subtracted and the referees were paid, the school will be sending approximately $3,500 to Relay for Life.

Friday’s winners were the Elite Eagles, a team of seventh graders who lost their first game and upset a team of eighth graders in a two-game match. Allen said they can look forward to being school celebrities for the remainder of the year.