Traveling preacher, faith healer to be at Outreach Christian Ministries 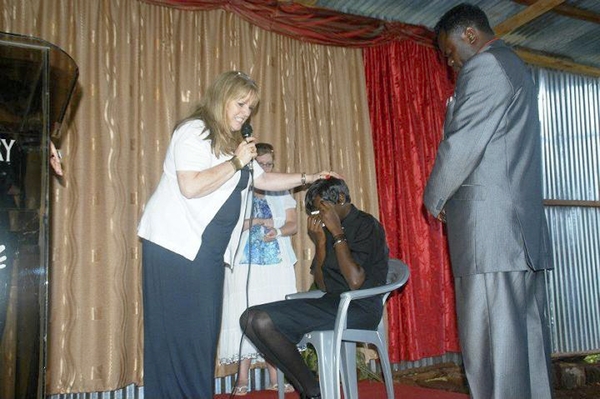 Joanna Coe-Herndon prays for a woman during an overseas service. Coe-Herndon, an evangelist who takes after her father, Jack Coe, will be coming to Salisbury in early March. Submitted

Joanna Coe-Herndon, a traveling preacher and faith healer, will be dropping by Salisbury early in March. Coe-Herndon, 64, has traveled the world, preaching from Texas to Uganda, but said it’s a life she fought for a long time.

Coe-Herndon grew up with revivals. Her father, Jack Coe, was a renowned preacher and healer. When she was young, the family would travel with him, attending services under a large tent while Coe preached and healed the sick. He held revivals under the largest tent in the world in the 1940s and ’50s, Coe-Herndon said, and the meetings were full to bursting, attended by tens of thousands of people.

“People by the thousands stood out on the street, hoping to get in, or get a glimpse of something,” she said.

Though she was young at the time, Coe-Herndon said she remembers how excited people were, “everybody clapping and hollering,” jumping and running and laughing,

“Usually in church back then we were taught to be still and be quiet,” she said.

But not at her father’s meetings. Her father, who Coe-Herndon described as an outgoing man, talked, preached and prayed. The meetings were always lively, and God always showed up. Once, Coe-Herndon said she saw a man lying on a bench, a death rattle in his throat, and she turned to her mother.

Her father died when she was five, but over the years of her own ministry, Coe-Herndon has been collecting stories. People come up to her now at her own meetings and tell her about how they were healed when her father prayed for them, or about the crowds in the streets or the wheelchairs piled “high as a mountain” outside his tent.

But a life of preaching isn’t something that came easily to his daughter. While she said she always knew she wanted to be a preacher, she also had dreams of being an actress.

“Those were two things I struggled with all my life,” Coe-Herndon said.

As she got older, there was tremendous pressure from people she met to pick up her father’s ministry.

“People wanted that again,” she said.

But she never thought she could do what her father did. After college, she worked as an insurance agent, and then for an entertainment company.

“I had a time in my life when I ran from ministry and the Lord,” she said.

Eventually, she and her husband began pastoring a church in Dallas, Texas. But it wasn’t until 2007, when someone asked her to speak at a women’s retreat that she thought about walking in her father’s footsteps. Coe-Herndon was scheduled to preach for a week in Tool, Texas.

“What was supposed to be a week turned out to be eight weeks,” she said.

During her two months in the small, lakeside town, Coe-Herndon said she was strongly impacted by young people who came to the meetings, and the way their lives turned around as they gave up controlled substances and self-harm. At the end of the revival, she was invited to speak in Virginia – and for the past 10 years, she hasn’t stopped.

“This is really what I should have always been doing,” she said. “I love it.”

In her ten years on the road, Coe-Herndon has compiled her own stories. She’s been from California to North Carolina, and this year will mark her ninth trip to Columbia. Everywhere she goes, she sits back and watches God work.

“We get to have fun watching God move,” she said, “and that’s why I feel like I’m still a kid or a young person, because it’s exciting watching what God does.”

And for every town she visits, she has a story. A man who was healed of gangrene in his foot, a woman healed of cancer, a man who had his sight restored, a woman who was miraculously able to hear, despite having her eardrum and inner ear removed.

But she makes it clear that she and her husband couldn’t “heal the headache on a fly.” It’s all God. And she knows that was true of her father, as well.

“He was only doing what God wanted him to, and once I realized that, it’s not about how big someone is . . . success is about obeying God, but it took me a long time to figure that out,” she said.

Now, when people talk about how she picked up her father’s ministry, she says that isn’t the case.

“It’s not because I’m Jack Coe’s daughter,” she said. “It’s God. And anyone who serves God and obeys God can do that.”

These days, the ministry has changed. Coe-Herndon said she mostly preaches in churches, unlike her tent revival father, and while she has been in a few tents, she’s not fond of traveling with them. And throughout her ten year-ministry of preaching and praying, she said she hasn’t run into many skeptics. If she does, she tells them stories, or offers to connect them to pastors or people who can supply a medical report.

But it’s not her job to convince them if they don’t want to be convinced, she said.

It’s her job to preach, pray and watch God move.

Coe-Herndon will be at Outreach Christian Ministries, at 722 West Horah Street, March 1-3 at 7:30 p.m. for the church’s celebration of 45 years of ministry and the birthday of Evangelist Alease Taylor. Speaker Tanya Pugh, from Oklahoma City, Okla., will also speak from March 9-11. The celebration will culminate in a luncheon on Saturday, March 19 at 3 p.m. For more information contact Linda Hunt at 704-754-1709.