The Parker brothers: They know how to cover ground 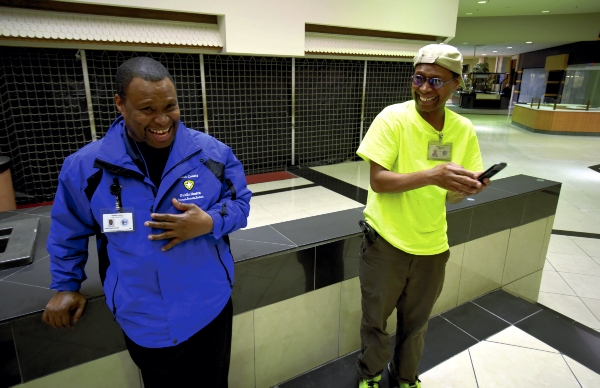 JON C. LAKEY / SALISBURY POST Brothers Chris (left) and Tony Parker both worked at the West End Plaza when it was known at the Salisbury Mall. When Rowan County bought the facility, the brothers became county employees and Chris went to work for the health department while Tony remained at the Plaza. The brothers share an apartment together and are looking forward to the possibility of the Health Department coming to the plaza so they will work together again. Wednesday, February 24, 2016, in Salisbury, N.C.

SALISBURY — On one side of Salisbury, an early city bus deposits Tony Parker at the West End Plaza. Tony fishes out his key and opens up the old mall, making sure to turn off the alarms and flip on some lights.

Tony retrieves a golf cart and begins policing the expansive parking lot for litter. Close to 8 a.m., he opens the doors for all the mall walkers. The rest of Parker’s day will involve cleaning bathrooms, shining up windows and vacuuming carpets.

On the opposite end of town, at the Rowan County Health Department, Chris Parker handles the same kind of daily maintenance chores as his younger brother Tony.

“People like me, if you give us a chance to do the job, we’ll take it,” Chris Parker says.

Chris, 50,  probably walks slower than most people because of the three leg operations he had for his cerebral palsy. As a youngster, Chris went through stages of relying on a wheelchair, crutches and braces before the operations allowed him to walk — and work — on his own.

“He definitely qualifies for disability, but he has worked all these years because he wants to be self-supporting,” says Steven Keels, maintenance supervisor at the West End Plaza, now owned by Rowan County.

“While he was here, I was amazed at how much ground he could cover.”

More than anyone, Keels knows about the Parker brothers, their dedication and work ethic.

Just a couple of months after the Salisbury Mall opened in the summer of 1986, mall owners hired Chris Parker as a custodian. In 1988, Tony Parker joined his brother on the mall’s maintenance staff.

The Parkers worked with and for Keels since 1989 and became part of the once bustling mall community. Everybody knew the Parkers and came to realize how friendly and dependable they were.

“Me and Chris try to keep it real,” Tony says.

Keels says the brothers hardly ever miss a day, and what stood out to him about Chris, when he worked at the mall, was how he would create projects and set goals for himself that were beyond his regular job duties.

“I thought that was admirable,” Keels said.

Tony, now 48, always has seemed to know instinctively what he needed to be doing, Keels adds. “He moves quickly into areas needing attention without being told,” Keels says. “He doesn’t need a written work order.”

About a year ago, after almost three decades at the mall, Chris was moved to the Rowan County Health Department, where he quickly has become a favorite among the other employees.

“They thought it would be best if I go over there, with the work I do,” says Chris, who puts in an 8 a.m.-4 p.m. shift Monday-Friday and gets to and from work in a county-sponsored RITA van.

In many ways, Chris and Tony Parker are still inseparable. They live together in the same North Ellis Street apartment.

“Sometimes he cooks, sometimes I cook,” Tony says. “We both clean up the house together. … We pretty much get along.”

When the weather cooperates, Tony often rides his bicycle around town and to work. “I can be here (the mall) in 30 minutes,” says Tony, who almost always has his ballcap on backwards. “That’s how I stay slim.”

Keels says he has often tried to talk Tony into obtaining a driver’s license, because he’s confident he could pass the test, but Tony still prefers the bike or bus.

Before they became fixtures at the mall, the brothers say they both worked briefly at Rowan Vocational Workshop. Tony also did some landscaping, and Chris worked in food service at the Hefner VA Medical Service for about a year-and-a-half.

Chris was 19 when he landed the custodial job at the mall, and he remembers how being given that opportunity, especially with his disability, “made me feel good about myself.”

Both the Parkers say they get their drive to work from their late mother, Frances Parker, who raised 11 children, including three sets of twins, on the earnings of a cafeteria worker at Knox Middle School.

Their father, Troy, died when they were young.

Chris still remembers seeing his tired mother come home from the cafeteria, sit down in the living room and fall asleep from fatigue. “I kept telling her, ‘Mom, some day I’m going to get out and work,'” Chris says. “She was a good motivator.

“She kept those kids in line when they jumped out of line. She worked over there (at Knox) till the day she died. She loved her job.”

You might not know it, but Chris and Tony each have a twin sister, and the names of all the twins in the Parker family are easy to remember.

Chris describes the love among all the Parker siblings, and Keels says “their whole family seems to be very good working citizens of Salisbury.”

Chris Parker doesn’t have a lot of patience for those who use a disability as an excuse for not trying.

“I’m blessed, you might as well be blessed, too,” Chris says. “Quit your crying and get moving. … They never thought I’d be able to walk.”

The Parkers saw the mall change ownership over the years before Rowan County purchased the property. A smattering of stores still exist, and the sounds of construction are conspicuous as work has begun on renovating spaces for the Rowan County Board of Elections and Rowan Senior Services.

“We’ve seen a lot of stuff come and go in this place,” Chris Parker says. “We were happy when the county bought it. It’s too good a place to let go downhill.”

The Parkers have no immediate plans to slow down. As Tony says, they try to keep it real.

“I’m climbing the ladder and getting ready to go down the other side,” Chris says, “but I’m thankful to be working. I’m going to work until the old leg stops.”