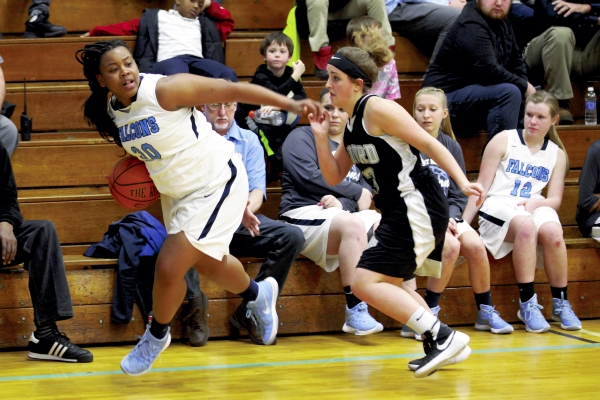 James Sipes for the Salisbury Post ... West Rowan’s Shanice Miller (30) saves the basketball from going out of bounds during last night’s playoff win over Ledford, as the Panthers’ Brianna Church gives chase. Miller led the Falcons to their 19th straight victory by scoring 17 first-half points.

MOUNT ULLA — West Rowan senior Khaila Hall got the birthday present she’d requested — a gargantuan game from classmate Shanice Miller.
Miller, who yanked down 13 rebounds, scored all of her 17 points in the first half, more than she’d scored in any full game this season. It was an amazing 16 minutes of hustle by Miller that enabled West Rowan to beat Ledford, 79-60, in a second-round 3A playoff game.
West’s standout senior guards, Hall and Taylor Martin, combined for only eight points in the first half, and Martin and freshman starter Mary Sobataka were in foul trouble with three personals apiece.
Yet the Falcons owned a 47-38 lead at the break. Credit Miller.
“Shanice is our strongest rebounder,” Hall said. “This was a big game, and I knew she’d come through for us. She’s a great team player, and she plays her best when we really need it. If she doesn’t have that great first half, it would’ve been hard for us to win.”
While Hall blew out 18 candles during her postgame celebration, a young Ledford team wasn’t in any mood to get blown out by the more experienced Falcons.
“Ledford just scrapped like crazy,” West Rowan coach Ashley Poole said. “It’s exactly what we expected them to do. They drove hard and they shot well.”
Fourth-seeded West (27-2) broke the school record for wins in a season and tied a school mark with its 19th consecutive victory. That record was set in 1994.
It was a contest marred by fouls, and it resembled football at times. There were 54 fouls whistled. Four of the visiting Panthers fouled out. Ledford, a No. 13 seed, also took advantage of numerous West fouls. The Panthers got 19 points at the foul line, including 12 in the second quarter when charity tosses enabled them to mount a comeback.
Egypt Alexander led the Falcons with 19 points. Miller finished with 17, Hall had 14, and Sobataka contributed 12.
Freshman guard Lyrik Thorne scored 20 for the Panthers (18-9). Sophomore Ashley Anthony scored 13, with eight coming from the foul line.
Thorne opened the game by draining a 3-pointer, but the Falcons made a furious run to score the next 11.
“We wanted to come out hot, and that’s what we did,” Sobataka said. “We knew they were a young team, but we knew they were going to give us a fight.”
That West run was stopped by a let’s-settle-down timeout by Ledford coach Chris Doby — and another 3-ball by Thorne.
“We didn’t make some easy shots early,” Doby said. “We got in a hole.”
Then Miller went to work on the boards. She had four layups in that first quarter, and the Falcons sprinted to a 25-13 lead.
When Sobataka and Martin drilled back-to-back 3-pointers midway through the second quarter, Ledford appeared to be on the ropes, but the Panthers got two 3-pointers from Emma O’Toole from deep in the right corner. Next came a flurry of free throws from Anthony and Thorne.
West settled for a 47-38 halftime lead.
“It was getting crazy out there, with everyone in foul trouble,” Alexander said. “Shanice was so big in that first half on the boards. She was finishing all her layups.”
Alexander shouldered the scoring load in the third quarter. West stayed ahead, with both teams experiencing offensive droughts. The score stayed 60-44 West for several long minutes.
“The problem we had tonight was we couldn’t pair our offense and our defense,” Doby said. “They outrebounded us badly, and in the first half we couldn’t stop them very much. I remember calling a timeout (with 3:22 left in the third quarter) and telling our girls we had to get some stops. Then we stopped West five out of six possessions, but we only scored once.
In that third quarter, Alexander scored eight points, and Hall got five. Shyann Vaughters, getting a lot of playing time with Martin in foul trouble, made two big buckets on difficult shots.
“Shyann gave us some big minutes off the bench,” Poole said. “We needed a good game from her with so much foul trouble.”
West led 64-48 heading to the final eight minutes. It still wasn’t a breeze, as Hall got her fourth foul with 5:37 remaining, and the Falcons leading 67-53. When Hall sits, West can get disoriented pretty quickly.
“That fourth foul was all my fault, it’s not like I can blame the refs for it,” Hall said. “I should’ve taken a charge, but I went for the block. Then I was out of the game for a while.”
Hall had to cover her eyes a few times, as West made careless turnovers. Ledford cut its deficit to nine and still had a chance until Martin made a driving shot down the lane.
Then Hall came back in, West went to its delay game, and it was all over.
Miller’s first double-double of the season keyed West’s first second-round win since 2004.
“It was a tough win,” Poole said. “A great team win.”
Ledford is a team of sophomores and freshmen, so the Panthers could be a factor for a while, especially when they go down to 2A for the 2017-18 school year.
“We battled our rear ends off tonight against a very good team,” Doby said. “Now we’ll regroup.”
West Rowan hosts Weddington on Saturday. Tipoff is planned for 6:30 p.m.