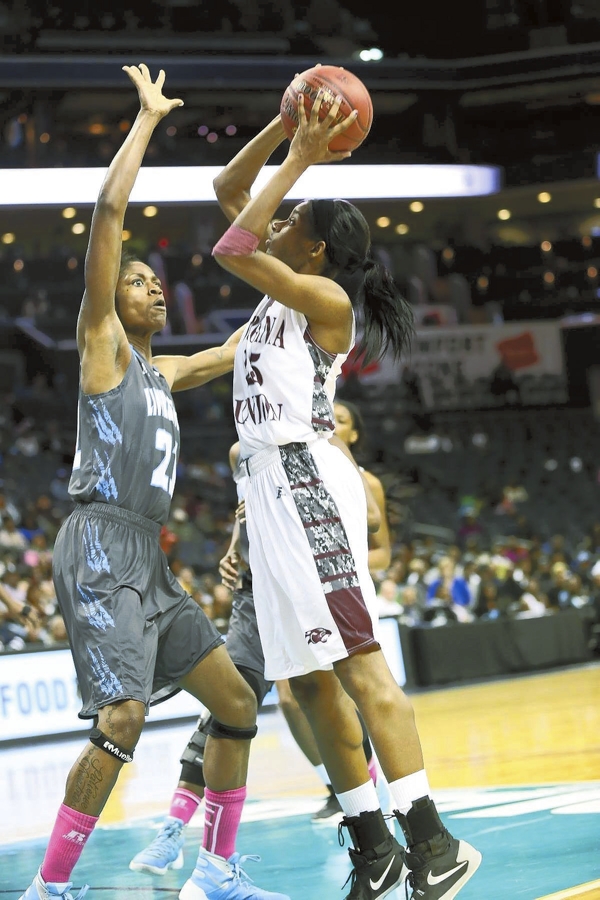 The Blue Bears fell to the talented Virginia Union Panthers, 93-63, in a game that was only close early and briefly. The Panthers are ranked 13th nationally and No. 1 in NCAA Division II’s Atlantic Region.

Virginia Union, 24-2, advances to the CIAA championship game against Shaw, an 86-77 winner over Chowan earlier on Friday. Livingstone finishes with a 15-12 record.

Three Virginia Union players combined for all but 15 of the team’s 93 points, led by Michigan State transfer Kiana Johnson, a 5-6 guard who poured in a game-high 41 points. Fellow starter Rahni Bell scored 15 points for the Panthers and Ashley Smith, a 5-5 guard, came off the bench with 22 points.

Johnson, a senior from Chicago, nearly equaled her game average (28.3, leads the CIAA) in the first half when she scored 27 points, leading the Panthers to a 44-32 halftime advantage. Johnson was 4-for-7 behind the 3-point arc in the first half and 5-for-9 for the game.

Johnson played 39 of the 40 minutes, making 14-of-26 shots from the floor and all eight of her foul shots.

In the first half, the Panthers immediately established themselves, leading 28-17 after one period. Livingstone cut the deficit to six points twice in the second quarter, at 32-26 and 35-29.

However, Bell and Johnson took over the final four minutes of the half to extend the Virginia Union lead to 12 points at the break.

“At halftime, we talked about it being a long game and that if we picked things up, a 12-point deficit was not too much to make up,” said Livingstone coach Anita Howard. “But going into the fourth quarter, the game got away from us.”

Johnson then scored the first four points of the second half and the Panthers raced out to an 18-point lead at 50-32.

Livingstone really never recovered and the closest it got was 15 points at 64-49 on a Fowler layup with 9:49 left in the game.

Johnson, Taylor White and Karigan Awkward then led the Panthers on a 10-0 run that all but decided the outcome.  The lead stretched to 33 points on a 3-pointer from Smith with 4:23 remaining, making it 86-53.

Virginia Union shot an amazing 54 percent from behind the arc for the game, making 13-of-24. The Panthers also sank 20 of 28 foul shots.

“Turnovers have been our achilles heal this year,” said Howard. “I told the girls that against a great team like Virginia Union, you can’t give them more opportunities than they already have. The turnovers really hurt us early on, giving them some easy baskets in transition.

The Blue Bears had gone into the game having won four of its last five, including Wednesday’s 50-45 quarterfinal victory over Lincoln. But Johnson and the Panthers, the No. 1 seed from the CIAA’s Northern Division, were just too much to handle.

Still, Howard was upbeat about next season.

“The future is bright,” she said. “We want to come back with a vengeance with some championship caliber athletes. You can expect Livingstone basketball to be right back here next year.”