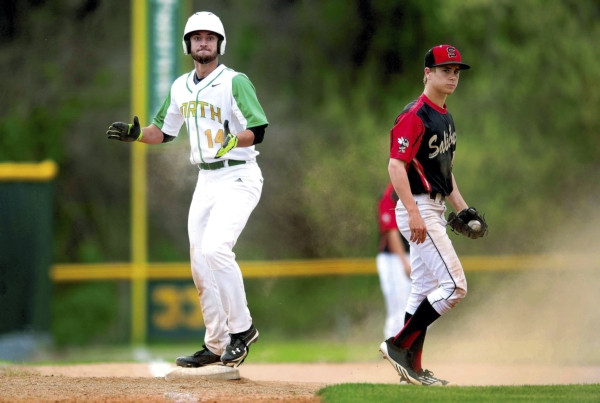 SPENCER — North Rowan baseball coach Aaron Rimer is in an unusual situation.
Rimer has 11 returning starters. Even with the designated hitter, that’s one more than he can put in his opening day lineup. North will miss graduated pitcher Cory Fries, but the top eight hitters are back, along with several experienced hurlers.
North adds talented sophomore McGwire Smith to the mix, and Brandon White and Jake Pritchard, a pair of potential all-county seniors, are healthy.
White was hobbled by an ACL tear part of last season after he was hurt running the bases.
Pritchard was activated late last season as a DH after recovering from shoulder surgery. Pritchard only got 24 at-bats, but he had eight hits and made the All-Central Carolina Conference team.
So who sits and who plays?
“It’s a good problem to have,” Rimer said with a laugh. “We haven’t been in that position in several years.”
Teams are only as only good as their pitching. North’s hurling should be good.
White, a lefty committed to Belmont Abbey, managed a 3-3 record a year ago, including a shutout of Central Cabarrus.
Lee Sells (3-1) and Joe Harrison (1-1 in 12 appearances) have a lot of experience. McGwire Smith is expected to boost the mound corps. Noah Gonzalez (1-2) appears ready for a breakout season.
“Noah can lose it pretty quick, but when he’s on, when he’s got it going, he can be as good as anyone in the county,” Rimer said.
Pritchard’s return as a full-time catcher will enable North to shift sure-handed Stevie Thurston (.288, 12 RBIs) from catcher to third base and Robbie Monroe (.326, 11 RBIs) from third base to first base. Monroe was All-CCC last season and produced a game-winning double in a wild, 13-12 victory against Salisbury.
White (.345) is a capable hitter and will be available for DH or first base duty when he doesn’t pitch. Corbin Smith (.259, 12 RBIs) returns at shortstop, while glove man Trey Stoner returns at second base.
As far as outfielders, Rimer can pick from a group that includes Javin Goodine (.213, 5 RBIs), Henderson Lentz (.268, 7 RBIs), Gonzalez (.327, 8 RBIs) and Harrison. Gonzalez led the team in steals as well as extra-base hits last season and made the All-CCC team.
North was 11-12 in 2015, swept Salisbury and tied the Hornets for third in the CCC with a 6-4 record.
North lost four times to CCC runner-up East Davidson last year, including losses in the CCC tournament semifinals and the first round of the 2A state playoffs. North went 0-2 against CCC champion West Davidson.
“We’ve got a chance to be good this time because a lot of our juniors and seniors have been playing since they were freshmen,” Rimer said. “Everybody knows what to do. That’s a blessing.”
North opens on March 1 against North Hills and plays Carson on March 2. Both games are at home.