WasteZero’s Campbell talks trash at Center for the Environment 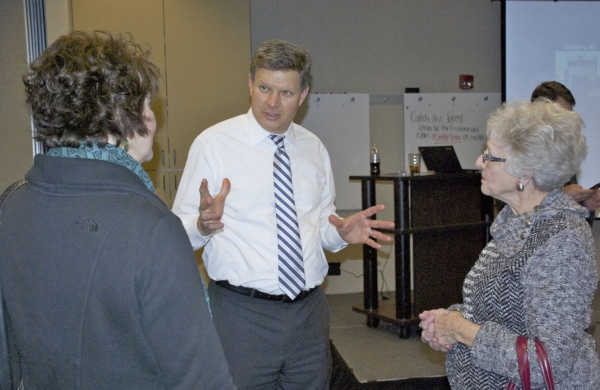 John Campbell of WasteZero, center, spoke this week at the Center for the Environment. Submitted photo

When most people think of trash, they probably think about wanting to be far away from the putrid odors of rotting banana peels and the mysterious black sludge at the bottom of their trash bin. John Campbell and WasteZero are an exception. They see trash as an area for new eco-friendly innovation.

Campbell visited the Center for the Environment facility on the Catawba College campus on Tuesday to talk about America’s ability to cut trash in half, right now, through his company’s “pay as you throw” program. WasteZero is a certified benefit corporation, which is a cross between a nonprofit and a for-profit organization. As a benefit corporation, WasteZero seeks both profits and community values as an equal part of their business model.

The program WasteZero created is simple – instead of having to pay a fixed fee for garbage disposal and recycling removal, they make recycling pick-up free and charge by the bag for trash disposal. With this program, residents pay a small fee, say $1 per bag, and the bags are regulated sizes but easily available to pick up at local supermarkets. By incentivizing what is good for the earth, and generally saving people money, the program has had success in more than 800 municipalities across the country.

The average American throws out 857 pounds of trash per year. Cumulatively, this adds up to about 520 billion pounds of trash a year, just in America. Twenty-two years ago, in WasteZero’s first attempt at this project in Worcester, Mass., the city saw the average amount of trash waste per person drop to 318 pounds per year.

Campbell says that a lot of Americans are hesitant about this program because they do not believe that trash is a problem. They have an “out of sight, out of mind” approach to waste since they just get rid of it by taking it to the landfills or setting it out on the curb to get picked up by the city. What most Americans don’t think about is where their trash ends up – landfills – where it sits for years waiting to degrade and become a part of the earth’s soil again. One of the biggest problems with landfills today is that they are becoming overcrowded and filled with things that do not degrade. This is why recycling and the WasteZero program are so important – to lighten the load in landfills.

Karen Alexander, mayor of Salisbury, along with the city manager, public works officials and the solid waste superintendent were all in attendance at the event. Alexander said that they are very interested, as a city, in implementing this program because of the significant trash reduction in other cities. Campbell says that his dream for Salisbury is the same as his dream for every city – to make the switch and address the issue of how to reduce trash.

“Cities and towns are realizing that they are spending far too much disposing of their waste. The system that most have now is just like water used to be – no meter and a flat fee. When we had that model, people were simply not concerned about water conservation,” Campbell said. “The same thing happens with trash, and as a result lots of money needs to be spent moving our trash around. Those monies could be used to fund education, to improve infrastructure or to reduce taxes. When you align the incentives of the city and its residents, the results are spectacular.”

Prosecutors question if Maurice Robinson could lie to change…