Powerful messages in ‘The Parchman Hour’ 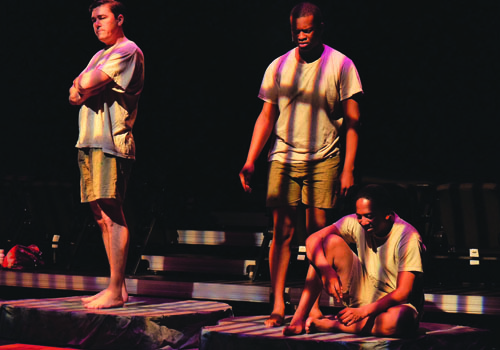 An outstanding cast, vibrant band and powerful movements and effects create a performance that will bring tears, gasps, laughter and leave the audience with plenty to think about.

The play is more than singing, of course, but what powerful, beautiful voices the cast members have as they sing familiar songs of the era. The actors are strong, emphatic, determined, frightened, serious.

Written by Catawba College graduate Mike Wiley, “The Parchman Hour” is based on the real experiences of Freedom Riders in Alabama and Mississippi in 1961.

Freedom Riders were mostly students, black and white, Christian, Jewish. They were trying to desegregate bus stations in the South.

The Freedom Riders emphasized peaceful protests, though what happened to them was anything but peaceful. The buses were blown up, set on fire and attacked by angry mobs thirsty for blood.

They ended up at the Mississippi State Penitentiary, often called the Parchman Farm, where prisoners were forced to work cotton as if they were slaves.

To keep their spirits up, they devised skits, songs and stories to pass the time — as if it were a radio show.

So while “The Parchman Hour” celebrates good music and happier times, it also puts the violence up front. With light, sound and musical effects, the audience is shocked as the students are beaten, stripped, every body cavity searched, then jailed without due process or representation, prisoners of a terrifying system.

Matthew Monte, who starred in “The Rocky Horror Show” and “A Few Good Men,” plays white student Stephen Green, who faces questions about his motives for being a Freedom Rider. His co-star in “Rocky Horror,” Gabrielle Stephenson, is Freedom Rider Joan Mullholland. Daniel Brown, last seen as Dr. Frank N. Furter in “Rocky Horror,” takes on a completely different character and impresses us again with his talent.

Patton has a beautiful voice and strong presence in his role as Farmer, the 41-year-old director of CORE, Congress of Racial Equality; Reshaud Brown is firm, insistent and powerful as Stokely. Alex Thompson as Freddie Leonard is very strong, too.

Every member of the cast, indeed, fully inhabits their roles.

The women, including Tameka Brown, who plays Lucretia Collins — previously seen in other productions including “The Color Purple” — is a tiny woman with a powerful voice and presence. Karina Moran’s rendition of “If I Had a Hammer” as Pauline Knight, is remarkable; and Najeema Bey, as Jean Thompson, powers through the songs of the era.

Tabitha Bass, who plays Hank Thomas, also gets to show her feminine side in several parts. Her expressions speak volumes.

The man you’ll love to hate is the talented Bob Paolino, who plays all the racist, violent bosses in the play. One unforgettable scene that is repeated several times features Paolino and Phoebe Hollingsworth, who plays his daughter.

It’s a large cast and every one of them is a standout. Marc Anderson is the beleaguered prisoner Pee Wee and Martin Luther King Jr. Joe Campolo and Brandon Engleskirchen get the unfortunate task of being the racist guards/citizens in the play.

The production is backed by music director Adrian Smith on the piano; Graham Carlton on lead guitar; Brian Roberts and Chris Pompey on drums; and Sean Tarleton and Dave Vergato on bass.

This is a production students should see, despite implied violence and some rough language. It will show them what people were willing to do for civil rights that seem to be eroding even now.

“The Parchman Hour,” sponsored by The Post Group and supported by the N.C. Arts Council, opens tonight, with performances on Friday and Saturday and March 3-5 at 7:30 p.m. For tickets, call 704-310-5507 or go to www.leestreet.org