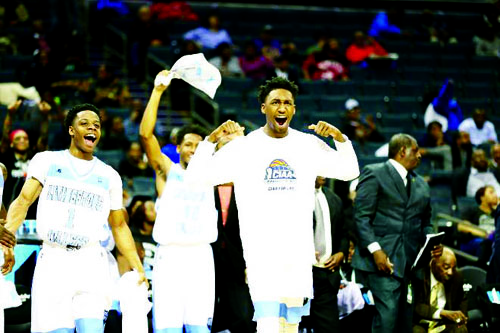 photo courtesy of the CIAA Livingstone players celebrate their 90-77 CIAA Tournament victory over Lincoln on Wednesday night in Charlotte.

Lincoln ends its season with a 9-20 overall record.

Coach James Stinson’s Livingstone used a balanced scoring attack against the Lions, as Eric Dubose and Daryl Trynham led the way with 17 points each, followed by Ty Newman with 14. Jimmy Wilson scored nine points and Cordero Holt and Nasir Austin followed with seven each, respectively.

Livingstone out-rebounded the Lions, 42-37, and scored 23 points off of Lincoln’s 12 turnovers. The Blue Bears also had 20 second-chance points off offensive rebounds.

After leading by just one point at 44-43 at halftime, the Blue Bears quickly increased their advantage early in the second half and never relinquished the lead. Dubose scored back-to-back baskets to make it 54-47 with 16:28 left in the game.

Two minutes later, Lincoln did manage to cut its deficit to three points at 56-53 on a three-point play from Jordaon Watson, but that was as close as the Lions would get.

Livingstone pulled away again behind Trynham and Wilson and then Newman and Holt added the knockout punches.

Lincoln (Pa.) was led by sophomore guard Quaman Burton’s 17 points while guard Jordan Watson added 16 points, including going three-for-nine from the three-point line. Forward Joshua Davis and guard Sean James both added 12 points each off the bench as well.

Newman, who was selected All-CIAA on Monday, had a double-double, grabbing 14 rebounds to go along with his 14 points. The senior guard also had three steals and one blocked shot.