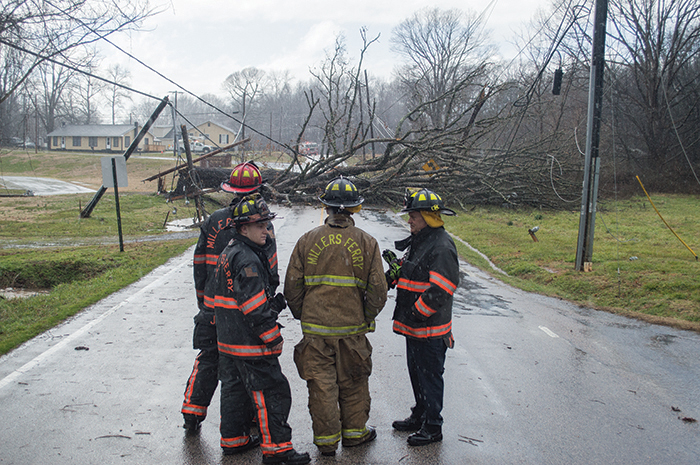 Josh Bergeron / Salisbury Post - Members of the Miller's Ferry Fire Department look at a down tree near the intersection of Long Ferry Road and Long St. The tree brought down a number of power lines and knocked out power to a portion of Rowan County.

Severe thunderstorms on Wednesday dumped a barrage of rain on Rowan and knocked out power for more than 1,600.

Rainfall estimates on Wednesday afternoon were more than 2 inches in some areas of Rowan County. High winds whipped through trees. First responders also received a number of calls about downed power lines. Some roads were also briefly closed because of downed trees and power lines.

The most significant effect of Wednesday’s storm was a massive block of power outages in the Spencer area. The storm forced a massive tree onto power lines near the intersection of Long Street and Long Ferry Road. Members of the Millers Ferry Fire Department said they were on the way to another call when the tree dropped power lines in front of their truck.

The tree damaged seven or more power poles. The incident resulted in power outages for more than 1,100 Duke Energy customers in the Spencer area. Some stop lights were also out.

Power outages in the Spencer area were first reported at about 1:20 p.m. Power hadn’t been restored by late Wednesday afternoon.