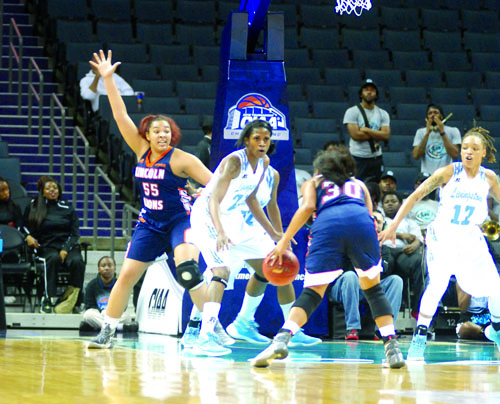 CHARLOTTE — How do you shoot 25 percent for the game and turn the ball over 20 times and still win?

You play good interior defense and control the rebounding, then throw in a little grit and determination because you don’t want your season or career to end.

Senior guard Amber Curtis, an All-CIAA selection, had her pocket picked last year against Lincoln for a winning layup that ousted Livingstone from the tournament. This time, Curtis was determined to not let the Lions end her season, or in this case, her career.

After a slow start, Curtis scored 10 points in the third quarter and finished with a game-high 16. She was also 10-for-13 from the foul line, including two crucial makes with 1:31 left in the game.

“We really wanted to win after how they beat us here last year,” said Curtis. “The girl stole the ball from me and laid it up. That hurt a lot, but it’s nice to avenge that loss.

“I was not going to let last year happen again,” said Curtis. “I thought that I went hard last year but I guess it wasn’t hard enough. I really was trying to leave it all on the court this time.”

“It’s good to have a bye, but it’s also a little bit detrimental because you’re sitting out and you don’t have a game in the big arena under your belt,” said Howard. “But hats off to Lincoln. We knew that they’d be aggressive early, having already played a game here. They fought but we fought a little harder and was able to come up with the win — an ugly win, but we’ll take it.”

Livingstone overcame a dismal first-half performance under the bright lights, shooting just 24 percent from the floor (8-for-33) and committing 13 turnovers. For good measure, the Blue Bears missed half of their 14 free throws as well.

The Blue Bears came out in the second half with renewed vigor as well, scoring nine points early in the third period. Lincoln countered with some long range jump shots.

However, Livingstone then fell back into their turnover and missed free throws trap, and the Lions got a big 3-pointer from Amani Clark to tie the game at 36-all.

The third quarter ended with Lincoln up, 40-37.

In the fourth quarter, Livingstone immediately fell behind by five points but then, taking its lead from Curtis and point guard Brittany Taylor and forward Taylor Daniels, the Blue Bears finished the game on a 13-3 run.

Foster made a layup, followed up by one from Curtis and Livingstone had tied the game with 5:53 left. Foster then had one of her five blocked shots, resulting in a fast-break layup for Zena Lovette and the Blue Bears took the lead for good at 44-42, at the 4:48 mark.

After an empty possession for Lincoln, Curtis had a one hand put-back of a Taylor miss and was fouled on the play. Curtis flexed her muscles towards the Livingstone bench, made the free throw and for all practical purposes, finished off the Lions.

In the final minutes, Lincoln got just one shot on each possession. When they missed, the Blue Bears’ Daniels was there for one of her game-high 13 rebounds.

“Our inside presence was outstanding,” said Howard. “They came up big, not just from scoring, but defensively. Foster came up with some crucial blocks and Fowler and Daniels came up with the rebounds. Everyone was ready to do her job.

“And our seniors don’t want to go home and that’s something you can’t contain,” continued Howard. “We’re focusing our energy on winning the championship. Even though our record isn’t where we thought it would be, we’re now 1-0 in this tournament and we still have two more games to win to reach our goal.”

Taylor, a junior who slows the team down when it gets going a little too fast, knows the task at hand. “We need to keep sticking together as a team, listen to our coaches and keep our composure under pressure.”