Editorial: Obama and the court 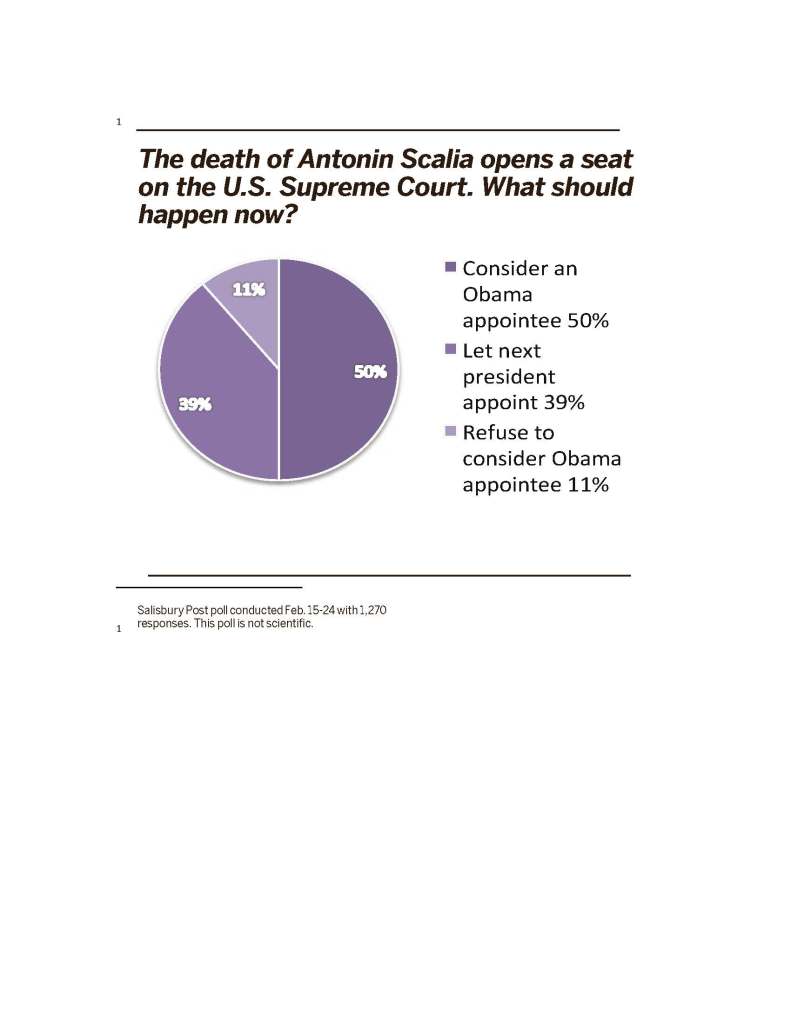 Like the rest of the nation, Rowan County has a stake in who fills Justice Antonin Scalia’s seat on the U.S. Supreme Court — maybe a bigger stake than most.

The county is still fighting a lawsuit over the constitutionality of commissioner-led prayer at the start of Board of Commissioners’ meetings. Lawyers for both sides presented arguments in federal appeals court last month. Depending on that panel’s decision and whether it is appealed, the case could ultimately wind up before the U.S. Supreme Court and lead to a precedent-setting decision that would reverberate across the land.

An Obama or Clinton appointee could tip the court to the left; a conservative Republican appointee would keep the court on its rightward tilt.

Rowan leans toward the conservative side, but the electorate appears to be divided over who should nominate Scalia’s replacement. Repondents to a poll on the Salisbury Post website — not scientific, but still interesting — were evenly split between the 50 percent who believed Obama should make a nomination and the Senate should approve it, and 50 percent who disagreed. They thought either Obama should leave the nomination for the next president to make, or the Senate should reject whomever Obama nominates. The poll drew 1,270 responses.

That’s just a few points off from a national Reuters/Ipsos poll reported last week, which  showed 54 percent of Americans believed Obama should make the nomination. The poll of 1,108 adults had a “credibility interval” of 5 percentage points.

Republican leaders have vowed to stonewall any Obama appointee; Democrats have played the same political game in the past. Turnabout is fair play. The president, however, has the right to nominate Scalia’s successor. In an ideal world, Senate leaders would withhold judgment for now. Senate Republicans have never withheld judgment on Obama, though. Maybe the next appointment will come from Hillary Clinton instead. Or Donald Trump could be in charge. How does “Supreme Court Judge Judy” sound?